They aren't calling it that, but that's what it is. In Tier five, schools will be closed, except for key worker's children.

In Essex, a "major incident" has been declared because of the pressure on hospitals there. And we're hearing about a shortage of oxygen, or oxygen delivery systems. The target blood oxygen level is at least 95 (I just checked mine, it's now 99, and it's usually 99, and 53 beats per minute). Below 95, is considered a cause for concern. Below 88, action is probably needed.

Secondary schools in most areas, will remain closed for at least two weeks, but exam-year pupils will be delayed by only one week.

Why? Because we've reached 50,000 new cases per day, we've nearly reached 1000 deaths per day, and hospital patients with Covid are more than there were last April. But last April, cases had plateaued; now they're still rising.

And it's hospital capacity that is the key - it always was. If people need hospital treatment and there's no room for them, they are more likely to die. We do have treatments for Covid; oxygen for example, and dexamethasone. But you won't get that if you can't get to hospital.

And it isn't just beds. It's staff. NHS workers can only do so much; after that, the have to sleep. That means that the Nightingale temporary hospitals might help with space ... but not with personnel. And we have a severe nursing shortage, because we cunningly created a hostile environment for EU people. We are short by 40,000 nurses. 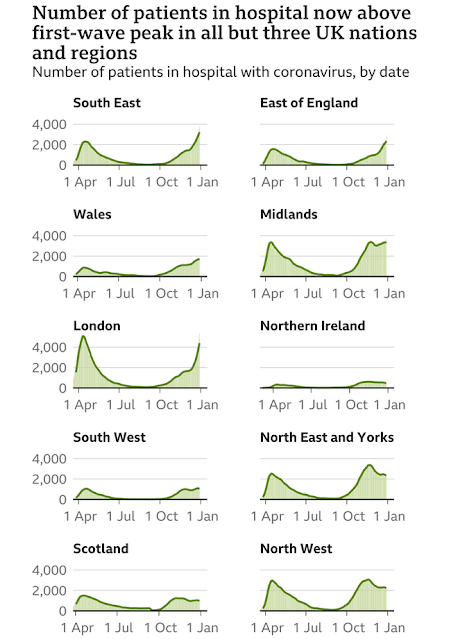