Day 268 of self-isolation - Fun with computers

I had to pay the water bill. I've paid it before, using HSBC online banking, so I tried to do the same again. But last time I used HSBC online backing, about a week ago, it suggested that I move from using their keypad thing, to using my smartphone, so I did what they suggested.

And they were supposed to send me a 10 digit code by post, to complete the change. But that hasn't arrived yet. So I couldn't use the smartphone system, and went back to the keypad thing ... which didn't work, because the geniuses at HSBC set it up so that if you changed over to the smartphone system, the keypad system stops working immediately, and you have no access to online banking until the letter arrives.

And I made it worse by requesting the code again, which means another letter will gradually wend its way to me and I won't be able to use online banking until it gets to me.

So I went to the Affinity Water web site, to pay by credit card. First, they wanted me to sign up and register, so I filled in my name, address, customer number etc etc, and their idea of a valid phone number isn't the same as BT's idea, but eventually I got past that, and they sent me an email with a link to click on to validate my email address. But when I cut-and-pasted the link into my browser, it told me that the link had expired (it's supposed to be valid for 24 hours). And I got the same again, three more times.

So I couldn't pay by credit card.

I filled in the complaint form at Affinity Water, explaining the problem.

So I phoned HSBC. I got the usual "We have an exceptionally large number of calls" (I can't remember calling a support line that doesn't have that problem) and eventually got through to a nice lady who told me that there was no way I could use online banking until the letter that I'd ordered today, got to me.

So I asked to make a formal complaint about their system that, deliberately, locks out anyone trying to make the change that they recommended, for several days. What idiot designed that? No, I know. It was designed by a designer. By whatever is the opposite of an intelligent designer.

So I got the nice lady to pay my water bill, and I've cancelled the move from the keypad to the smartphone, and now they will be sending me a replacement keypad, which is just as well because the battery in the old one is dying, and there's no way to replace it.

When the new keypad arrives, I'm going to dismantle the old one. There's a battery in there somewhere. 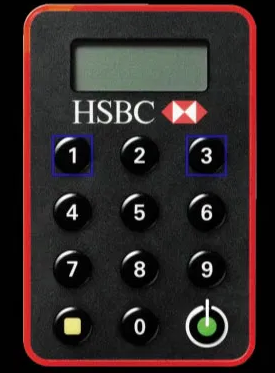