On the other hand, a number of areas are being moved into lower categories.

The number of new infections is growing. Do you remember the situation last March/April? 5000 new infections each day, the Nightingale hospitals were put up as a precaution?

Part of that is because of widespread testing, of course. Back in April, you had to be pretty sure that you have the virus, to get tested. But part of it is probably a truly higher level of cases.

The total deaths in the UK are now over 1000 per million.

And the mixing of people on December 25, is going to add to the spread. Hopefully, not by a lot; it depends on how seriously people are taking it. 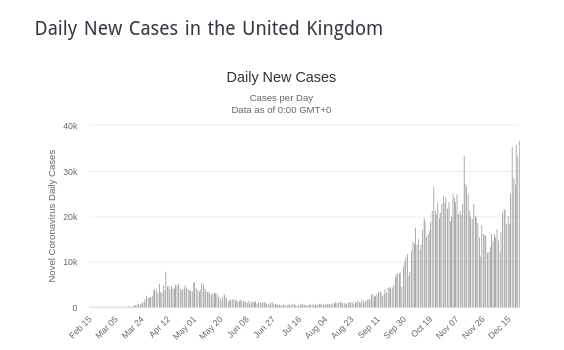 Meanwhile in America, new cases are running at 220,000 per day and the death rate is around 3400 per day. The total deaths in the USA are now over 1000 per million.