America is suffering.  Cases, hospitalisations and deaths are all at record levels. And still many Americans refuse to admit there's a crisis. 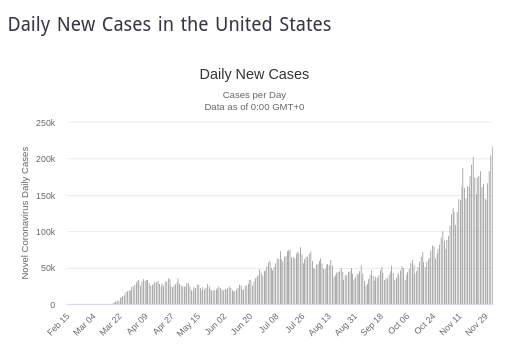 Then you get ill. Most people recover, but some become very ill, and have to go to hospital. That would be a week or two later. 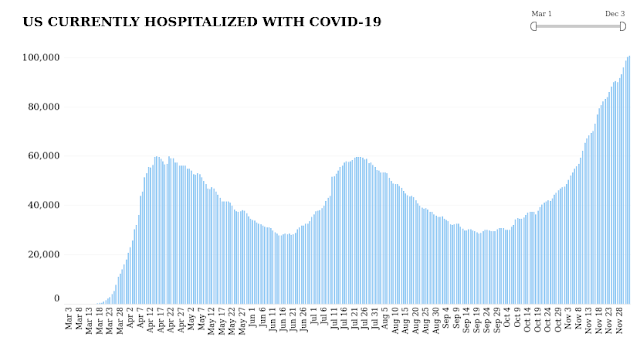 The current level of hospitalisations is 100,667 and rising fast.

Most of these recover. But many do not. 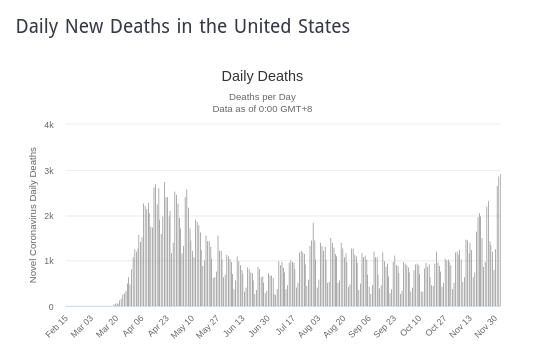 The deaths per day has just exceeded even the worse levels of last March and April, and is now 282,829

And it's not as if this is a surprise. In March, we were surprised - no-one could have predicted the rise in cases and then deaths back then, mostly in New York state and nearby states, because that's the destination for most people flying in from Europe.

But the resurgence in July should not have come as a surprise. And when many of the restrictions were lifted in September, and schools re-opened, the rise in cases was inevitable.

And still many Americans do not take the simple, low-cost precaution of wearing a mask.

But the vaccine is just around the corner. It will be too late for too many people. And it will be useless to those who refuse to accept it, for reasons that are mostly to do with trust.

For too many years, Trump's objective has been to attack the trust that people have in their government. He's attacked trust in the media, trust in the medical profession and trust in many politicians. And trust, once lost, is not easily regained. For a long time to come, Americans will not trust their institutions.

We can use this disaster as a learning experience. Look at what happened there, and try not to let it happen here.

The first vaccinations in the UK will be on December 7th. I will be very happy when it's my turn to get jabbed.