I was in London for two days over Christmas, and I was shocked at the number of people I saw in Westminster and Victoria, sleeping in doorways and on the pavement.

Fortunately, the weather was mild. But it's still unacceptable. And it isn't just unacceptable over Christmas, it's terrible any time.

I do realise that it costs money to offer shelter to people, but there are so many empty buildings in London, such as churches, unused offices and palaces. And there is so much food thrown away at the end of the day, because tomorrow it won't be fresh.

Sleeping rough must be very bad for health, and invites crime against the sleeper. Our government is supposed to provide a safety net for people who are unable to cope. Why isn't this happening?
Posted by drsolly at 17:26 1 comment:

35 years ago, Frank Thornley showed me Command and Conquer. I was immediately hooked, and it became my favourite game for a long time. I continued through Red Alert, downloaded lots of missions, and it was great. But after several years, I moved on to Civilization.

But now that I can reliably win Civ at Deity level, I'm waiting for Civ version 7, which isn't even on the horizon.

I just rediscovered C&C. There's an open source version now, and it runs fine on Linux. I downloaded it, and clicked on it, and it just worked! I've done the first few missions, and I'm just getting used to the game again. I think there are some differences from the original version, especially in the user interface.

I love the combination of economic development and war strategy and tactics.

So, that's my Christmas sorted!
Posted by drsolly at 14:22 2 comments:

Following the catastrophic defeat of the Labour party, there will now be a leadership change.
Corbyn has announced that he will not be fighting the 2024 election, but he's being pushed to resign sooner than that.

What were the causes of the landslide? In no particular order ...

1. Brexit. Under Corbyn's leadership, Labour took a definite "On the fence" stance. This was the biggest question of the election, and his response was "No comment"?

2. Corbyn's friends, the terrorists. Corbyn has cuddled up to the IRA, to Hamas, to Hezbollah, and he has not apologised for that.

3. Policies - my impression of the Corbyn manifesto, was "Free stuff for everyone". And after the manifesto was published, Corbyn offered another £56 billion to the Waspi women. And gave no guidance to where that huge sum would come from.

4.  The NHS was an issue in the campaign - but the policy of reducing the five day week to four days (at the same pay), would have knocked 20% off the NHS budget.

5. Antisemitism. There's a number of aspects here. First, it's clear that Corbyn didn't care about antisemitism, and might have been personally antisemitic himself. For sure, he didn't do anything much about antisemitism in the Labour Party. This lead to the loss of a quarter million Jewish votes. And worse, it led to the loss of a quarter million keen activists, who would have been knocking on doors, handing out leaflets and getting out the vote. The referral to the Equality and Human Rights Commission is going to (probably) hammer the last nail into the coffin containing the Labour Party.

The factor most mentioned by voters on "Why didn't you vote Labour was" ... Corbyn. He was just too much heavy baggage, an anchor dragging on the bottom of the sea, and the Labour party will probably dump him now.

The Labour party is now so far down in the vote, that it's going to take about ten years before it has a chance to get elected, and a party that isn't elected, can't do anything.

So, I joined the Labour party.

It's really easy, and it only costs me £2.17 per month. The party has 485,000 members, so if a few hundred thousand people join the party now, we'll really have a BIG say in the future direction of the party.

To be realistic, you cannot say right now, which way you will vote in the 2029 election. But if you join the Labour party now, you'll help to choose the party leader, and you can help steer the party off the rocky road that it has been on recently, which will give you a credible alternative in 2029. Maybe you'll still vote the way you did this year. But it would be great to have a real choice, and not find yourself voting for the "least worst" party. 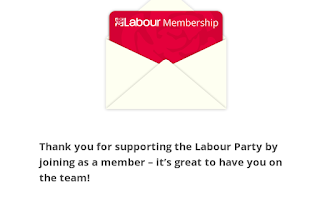 I joined. And I'll be voting in the leadership contest. For, I hope, someone who can reject terrorist "friends", eradicate anti-semitism in the Party, and move the party from the extreme left to the center-left, where Labour has a chance of winning power in the 2029 election.

For a lot of people, including myself, there isn't any party I want to vote for.

The Tories want Brexit (and caused this mess in the first place).
The Labour party has become institutionally racist.
The Libdems seem to have lost touch with reality. Actually, that's true of all of them; they seem to think that fighting an election is a matter of who can spray the most money into the air. But we voters know that this magic money will evaporate as soon as the election is over.
The Greens are even more unrealistic than the Libdems.
The SNP doesn't appear south of the Border
The Brexit party don't seem to have more than one idea.
UKIP is nearly as racist as the Labour party.
Does the BNP still exist? I hope not.

Which leaves the Monster Raving Loony party as the only party that attracts, and the only party without completely barmy policies. Who would have thought?

Tomorrow, I will turn up at my local polling station with a peg on my nose, and I (like most other Brits) will be voting for the least worst (and it's a close-run race). I'm hoping for a hung parliament, when any of the fools above don't get carte blanche to wreck the country and my life. And I'm hoping for a landslide defeat of the racist parties, so that they can reconsider their position and abandon their vile racism.
Posted by drsolly at 16:43 No comments:

I've just finished watching eight 1 1/2 hour episodes of Hornblower, on Youtube. It's really good, I recommend it. If you don't know what Hornblower is, it's the story of a young naval officer during the Napoleonic wars.

Before that, I watched a couple of dozen half hour episodes of "Jeeves and Wooster", also very good. If you don't know what Jeeves and Wooster are, then you're obviously not British. Hard luck.