I'm not even going to try to explain it. What I'm seeing is a bunch of headless chickens who don't know where they've been or where they're going.

Plus, we have an MP in jail, but who isn't going to resign because she wants to keep on getting that nice £77,000/year.

What we are seeing here is a synchronised display of incompetence, and of the British Public loses faith in parliament, it won't be because of any future referendum, it will be because we never realised that they were such plonkers.

And I've found out that if we leave the EU, then I can't use the VAT Moss scheme for paying vst to the EU-27 as I have before. I have to join a different scheme, and to do that I have to sign up with some other country (Ireland is my choice, because they'll speak English there)
to pay my VAT obligations to the 27 remaining EU countries.

Except that I can't do that until after March 29.
And my VAT quarter ends on March 31.

These idiots have absolutely no idea what chaos they're causing.

I doubt if many small traders are ready for this. Or even know about it. With any luck, the accounting package they currently use, will do this for them; for example Sage and Quickbooks will. But what about those of us who use custom systems?

I've been worrying about this, and with the deadline coming up, I've done some serious research, and it turns out that it's not going to be a big problem.

Various packages are available, costing anything from £216 per year down to £15/year.  Taxoptimiser will do it for free for the first year, £30/year thereafter. But there's even better news.


https://www.quickfile.co.uk will do it for free. I've signed up for their service, I found where to go to do the tax returns, and it looks easy.

Hi All,
Please find below the Up to date emergency exit map.

A very strange spam. There was nothing enclosed, no product on offer. So I looked deeper, and the "Emergency exit map" is a link to a web site which I'm not going to visit.

My hearing isn't too good. I have trouble when there's a lot of noise going on and I cant focus on the conversation, especially when people aren't facing me when I talk.

I had a hearing test, but they said I was fine. So - hearing aid?

I decided on something more drastic; a unidirectional microphone with a paraboloid reflector (which will help with the unidirectionality), with an amplifier. And a filter for high/low frequency sound.

This sounds expensive - a good digital hearing aid can be well over £1000. But this wasn't. £20 got me a device that is used for listening to birdsong at a distance, and as a bonus, it can record what you hear. 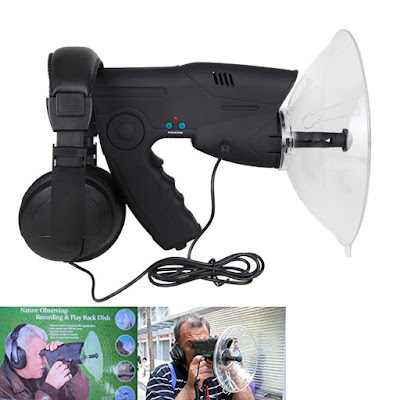 I can't wait for the next time I go out with the family to a restaurant, and I bring out this device.
Posted by drsolly at 00:39 No comments:

'E's not pinin'! 'E's passed on! This parrot is no more! He has ceased to be! 'E's expired and gone to meet 'is maker! 'E's a stiff! Bereft of life, 'e rests in peace! If you hadn't nailed 'im to the perch 'e'd be pushing up the daisies! 'Is metabolic processes are now 'istory! 'E's off the twig! 'E's kicked the bucket, 'e's shuffled off 'is mortal coil, run down the curtain and joined the bleedin' choir invisible!! THIS IS AN EX-PARROT!!

Tomorrow, there will be a confidence vote on the government. I think that Corbyn is right to call it, but the Tory government will win, because they can't afford to lose, because that leads to a General Election, and the possibility that the Tories are out of government.

Then May has three days to explain plan B.

There is no plan B, of course. I will not be surprised if she resigns, on the grounds that she's done her best, and someone else can clean up this mess.

And I think that the steering and brakes on this particular bus, have failed. We're crashing out. No deal.

So let me explain my own particular little problem, and it is to do with VAT.

Or am I wrong? I've asked HMRC; they don't know either.