Day 128 of self-isolation - Vaccine by Christmas

Donald Trump has asked that Americans should wear masks whenever they can't maintain social distance. He has finally realised that it's unpatriotic to go without face coverings in situation where an infected person could infect many others.
He's also claiming that The USA is doing very well. "we have done things that few other countries could have done". That's true. Very few other countries could have reached four million cases,  of which two million are currently active, and 145 thousand of which are dead. 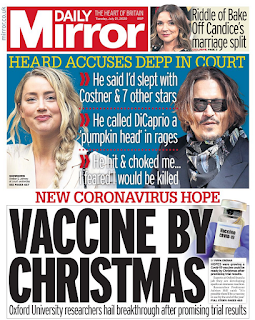