This is the 15th anniversary of the London 7/7 bombings. 52 innocent people murdered as they went about their daily business, and many more badly injured.
52 in one day. But now, we'd be happy if only 52 people died of Covid-19 in one day. It's not as bad as the 1000 per day we saw in April, but the 100 per day that we're seeing now is still many more than the other European countries are seeing.
I've already written about the bungling of our government, I won't go through that again. But they're still shy about telling people to mask while out and about. I see going unmasked in public during a pandemic, as similar to drink-driving. You're a danger to everyone near you.
But our daily case numbers are still down, although with the open-up only being a few days ago, it's too soon to see the effect.
Australia is seeing a resurgence of the pandemic; in Melbourne the virus is spreading and Victoria has locked down again. Melbourne will be locked down for six weeks, and it's a full stay-at-home lock down. If we become careless in the UK, we'll get the same problem.
In Brazil, president Bolsonaro (who said that Covid-19 is just a little flu, and who made a point of going unmasked) has become infected with Covid-19. 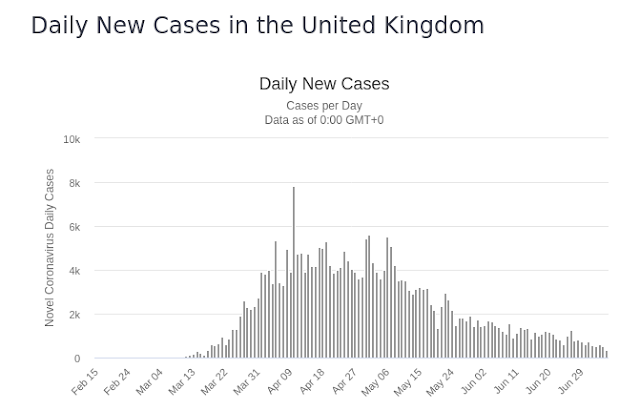