First up - I have no idea who Kanye West is. I gather he is some sort of celebrity - more of a nonebrity. I read that he's a rapper, which is the modern word for "poet". But he's signed up in a bid to be US president in 2020. I'm all in favour of poets for politicians. But maybe they should start a bit lower in the hierarchy.
His campaign slogan is "YES", which might be an answer to the question "Who are you?" "YES".
This isn't the first time we've seen joke candidates. I remember in 2016, there was John McAfee (who I knew well, but maybe you don't) and Donald Trump. McAfee was a guy who marketed an antivirus product a few decades ago. Trump was a reality TV actor.
The point of such a bid is, cheap publicity. The media will have a lot of fun with West, as they did with McAfee and Trump. I am reminded of the "Monster Raving Loony Party" that often contests seats in the UK; West's part is the "Birthday Party". I wonder what his campaign song is.
He is anti-abortion (as are so many in the USA, because they see it as murder) and he's sceptical about a Covid-19 vaccine. I don't really understand how you can be sceptical about something that doesn't actually exist yet (a couple of hundred possibilities are still in development and test). And he calls it "the mark of the beast", which, although I know that this is something to do with the number 666 and the implanting of something in everyone, I don't see what this has to do with a medical procedure.
“They want to put chips inside of us, they want to do all kinds of things to make it where we can’t cross the gates of heaven.” No, Mr West. No-one wants to put chips inside of you, and you can go to whichever heaven you want, any time you want.
“Planned Parenthoods have been placed inside cities by white supremacists to do the Devil’s work."
On Covid-19: “We pray. We pray for the freedom. It’s all about God. We need to stop doing things that make God mad.”
No-one is taking him seriously.
But then, no-one took Trump seriously. 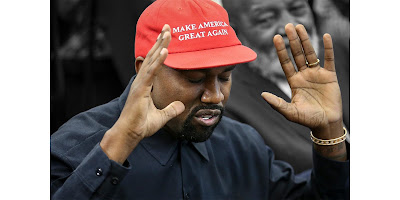