Day 130 of self-isolation - a trip to the dentist

A trip to the dentist
Just before lockdown, on the 16th March, I broke my self imposed lockdown for a trip to the dentist. This was a week before the official lockdown on 23 March, and I was looking forward to an extraction. Actually, "dreading" would be a better word.
I had a painful tooth, and I could feel that it was a bit loose, and when the dentist looked at it and x-rayed it, she could see that it was broken - split down by the base. And it had to come out, no two ways about it. So, on 16th March, out it came. It needed a few injections of local anaesthetic, which stung more than somewhat, but the actual extraction was so painless, I didn't even know it had happened until she told me. Then I had a few stitches to help it heal, and that was that. I wouldn't have to go back to have the stitches out, they would deal with it themselves. And they did.
So a week ago, one of my fillings fell out as I was eating a piece of boiled cauliflower, which is the softest food you can imagine. And, a few days previously, another filling had fallen out without me noticing it until my tongue alerted me to the gap. So I booked a trip to the dentist, now that they've reopened. The procedure is completely different now.
First of all, they aren't doing any drilling, because that results in a big cloud of droplets in the air. So it's only fillings and extractions. And they wipe down all surfaces between patients (they haven't decided to use UV to sterilise the room).
So, first they emailed me a form to fill in; routine stuff about health and medications, and I emailed it back. Then I paid over the phone. So far, no face-to-face contact.
On the day, I cleaned my teeth, and arrived on the dot for my appointment, because they don't want patients in waiting rooms. As I came in through the door, there was hand sanitiser that automatically delivered a dollop to me, so I used that. And latex gloves, which I put on. Then up the stairs to the reception area, where an assistant was waiting with a distance thermometer. I passed that test, and my dentist followed me into the surgery. I took off my face mask (obviously) but left my goggles in place.
She gave me a small cup of very dilute hydrogen peroxide (a gentle bleach which breaks down into water and oxygen) to swish round my mouth for twenty seconds. DO NOT TRY THIS AT HOME. Only do this if your dentists asks you to. I usually use Listerine, a mouthwash you get in any pharmacy. Then I lay back in the dental chair, with my carry-bag on my lap (I wasn't allowed to put it down anywhere). The peroxide didn't taste of much, but there was a slightly sour after taste.
She did the fillings, using a "temporary" filling material. She explained that this was less resistant to wear, but just as good at staying in place, and that's fine by me, because wear isn't going to be the problem for these fillings. The fillings were done in a few minutes. I thanked her, mentioned the ultraviolet idea, and left the surgery. I put my mask back on before leaving, and removed the latex gloves and dropped them in the bin provided. Another splodge of hand sanitiser, and I was done.
This was one of the least stressful visits to the dentist ever, because I knew there would be no drilling! 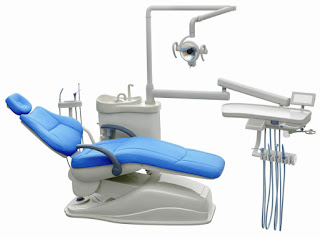