A script for a disaster movie. 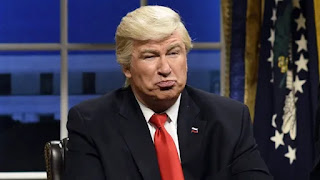 "Little did we know that this press of humanity was being regarded with envious eyes; slowly and surely they drew their plans". Music bridge "Dum dum dum ... dum dum dum".

Flashback to 2016. Kate McKinnon, alone in a hotel room, crying. "How could this happen? HOW COULD THIS HAPPEN?" Takes off a shoe, throws it at the TV.

Cut to Wuhan hospital. People in biohazard suits. People in beds. Lots of coughing. People hooked up to scary machines. Doctors and nurses scurrying around, looking harrassed and frightened. Some nurse says "Doctor, I don't think this is just pneumonia"

Cut to Wuhan airport. People in the passenger hall, a mixture of Chinese and westerners. One of them sneezes. We hear the sneeze, but we don't see who it was.

Cut to inside of airplane. Everyone wearing seatbelt. Camera tracks from font of plane to back, then turns and we see the backs of the heads. We hear another sneeze.

Back to New York. New Year celebrations. "Three cheers for 2020!" Fireworks. Crowds and crowds of people.

Meanwhile in Wuhan, the lockdown. Silence. A truck pulls up to an apartment. Two biohazard suited workmen get out, with wooden planks. They board up the entrance to an apartment, get back into the truck and drive away. Inside the apartment, two scared people are sitting. the look at each other, scared. One of them coughs.

Cut to Italy. In a hospital. Beds in corridors, everywhere, all occupied. Doctors and nurses rushing around, wearing biohazard, trying to do their best. One of the nurses pauses, clutches the end of one of the beds. Slowly crumples to the ground. Meanwhie in Spain ... similar scenes. A doctor off duty, crying. Talks direct to camera "800 dead today. What are we supposed to do?"

Cut to Chicago O'Hare airport. Americans getting off the flight from China, happy to be home. One of them sneezes. Cut to JFK. Flights from Italy, Spain, France, UK. Peole passing through customs, immigration, passport control. Someone sneezes. Someone coughs several times. Someone else sneezes.

Back to the Oval Office. Baldwin talking. "There's fifteen, just fifteen, and soon it will be down to nothing."

Back to New York.  The streets are deserted. Where are the people? Zoom in to New York General Hospital. Frenzied scenes like the ones we saw before. Close up on someone being intubated, we see a one centimeter diameter tube being pushed into the mouth and down into the trachea. The oxymeter starts showing 85%, but slowly rises to 90%. Nurses look anxiously at each other. One shakes her head, sadly.


Back to the Oval Office. Baldwin talking. "It would be great if we could reopen the churches for Easter"

Cut to a doctor in a break room, looking exhausted. She looks at the camera, and we see the tears on her face. She says "One death is a tragedy. A thousand deaths is a statistic. Yesterday, we had a statistic." Newsreader looking sombre. "Yesterday, 2500 people died in the USA of Covid-19"