Patriotism
How did Governor Andrew Cuomo handle the epidemic in New York State so well, and what can we learn from this?
I watched his briefings most days; the pattern was the same each day. He started off with the facts, figures and graphs. New cases, new hospitalisations, new intubations and new deaths. And we watched as the case numbers climbed day by day to a peak of 11 thousand on April 4th, but we didn't know at the time that this would be the peak. Then it levelled off for a week or two, then it started a decline, which was much slower than the rise.
Deaths followed a similar pattern, peaking at a thousand on April 7th then levelled off for a week, then the slow decline. And again - when we hit the peak, we didn't know it at the time, and Cuomo was straight with us. No false optimism, no dire pessimism, just the facts that we had at the time.
They got the Jarvis center ready as an emergency overflow hospital. It turned out that it wasn't needed, but since no-one knew where the peak in hospitalisations would be, it was a sensible precaution. There were shortages of all kinds of medical equipment; PPE and ventilators especially. Cuomo sourced from everywhere he could, including direct from South Korea. At the time, the 50 states were bidding against each other, driving up prices. There was no centralised purchasing. Cuomo had to make do with what ventilators he had, but shoifting them around from hospital to hospital. No-one was allowed to keep a reserve for the future, there just weren't enough for that.
He got help from other states, and the peak was passed. Every day, Cuomo reported the numbers, and what was happening. And he used patriotism. 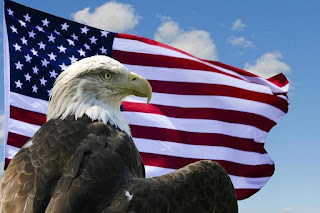 But not American patriotism. New York patriotism. New Yorkers are supposed to be tough and smart, and he emphasised that every day. And disciplined, and loving, even though I was a bit sceptical about that, but he gave full credit to the people of New York for beating the virus. Not to himself. And every day, he told New Yorkers that they were fighting the virus, and to what extent they were winning the fight - not with just rhetoric, but with the numbers and the graphs. And politics didn't come into it, it was New Yorkers, versus Covid-19.
And they did testing and tracing, and more testing and more tracing, because testing reveals more cases of Covid-19, and it also tells you where you are. Without testing, you're working blind.
And after a couple of months, genetic analyses of the virus told us where it had come from. Originally China, yes, but in the case of New York, via Italy, Spain, France and UK. Because New York is where most transatlantic crossings go. And although flights from China were restricted on January 31, flights from Europe weren't stopped until it was far too late. The virus hit New York because New York has the main airports from Europe.
Mistakes were made. Not stopping international flights until too late. The epidemic, and deaths, in care homes came as a surprise, although with hindsight ... if only we had hindsight in advance.
New York patriotism. And it worked. New cases per day are below 1000 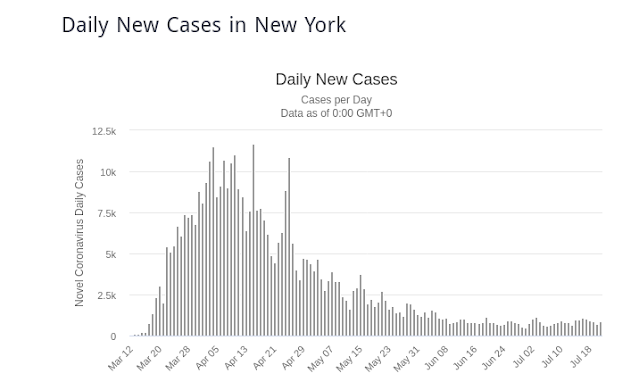 And deaths are down to a dozen or so per day. 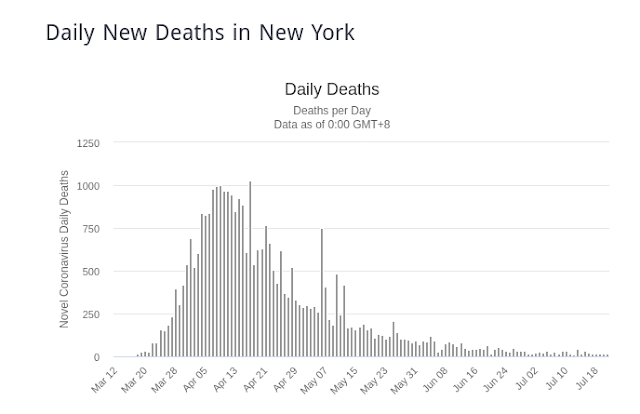 This should be a template for every other state of the USA. If New York can do it, so can any other state. Plus, everyone has the advantage of all we've learned about Covid-19 since March. Such as, proning (laying on the front) a patient helps them breathe, the drugs that have been clinically tested and are useful, like the fact that clotting can be a problem (use heparin), like the fact that the disease can also hit the kidneys, and all the other medical lessons that New York learned the hard way.
But mostly, that it's up to the people. The people have to be given leadership, straight facts and encouragement to do the right thing for their fellow citizens,
Patriotism.
Posted by drsolly at 00:32