Day 119 of self-isolation - Masks at last

It's obvious to me. It's obvious to most people. And the "masked hamster" test proved it. Masks slow the spread of the virus. They aren't a magic cure, but they reduce the chance of you getting it from someone else, and of you giving it to someone else.

Imagine you are playing a game, and at some point, you can pick up an item that halves your chance of getting killed. Of course you pick it up. So what if you find an item that can cut 20% off your chance of getting killed? Yes, you still pick it up. So now I'm offering you a piece of cloth that you put over your mouth and nose, and you're refusing it?

Should masking be compulsory? Maybe, that's a good question. But since it's good for the people, our leaders should set the example. Until now, that example has been conspicuous by its absence. But, at last, Trump and Bojo are masking.

Will this make a huge difference? Probably not, but maybe other politicians will follow their lead, and by personal example, incentivise people to do something that they aren't used to do in the past.

Gove contradicts Bojo, and says "Use common sense". What a stupid remark. Common sense is stull you've known for so long, you don't remember when you learned it, like not putting your hand in the fire. But masking isn't common sense, because we're in a whole new situation.

In Scotland, face masks are mandatory in shops. It doesn't have to be a medical grade mask, just cloth covering the mouth and nose. This makes sense because the main spreader of the virus is air droplets, and the cloth mask substantially reduces the amount that you emit.

In Scotland, people are following the rules. Because when you explain to people that something is important, and cheap, and easy - then they will do it. And I love the tartan statement that Nicola Sturgeon is making! 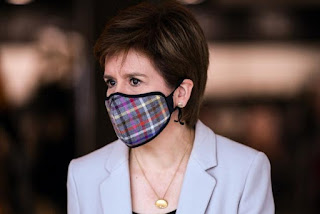 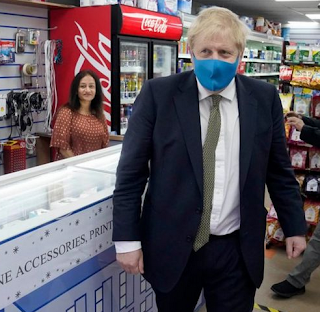 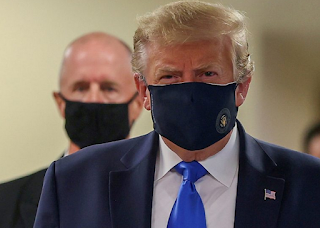