American trust in their government has become so weak, that only 21% of them will get a vaccine as soon as it becomes available.

This is what happens when you're unlucky enough to have a president like Trump.

The Woodward book reveals that he knew how awful the pandemic was going to be. Five times as deadly as influenza, and much more infectious; spreading through the air you breathe. Yet he deliberately downplayed it, with his eye on the coming election. "It's like flu", he said "and one day it will just go away", he said. "With the warm weather," he said. "Inject disinfectant," he said. "What have you got to lose?" he said.

200,000 death, and many more permanently scarred. That's what America had to lose.

Shouting "FIRE" in a crowded theater, is very irresponsible - unless the theater really is on fire, in which case it would be grossly irresponsible to pretend that there is no fire, everything is under control, the fire will be out in a few minutes and the smoke and flames that you're seeing are just a hoax.

He is obviously keen now, to announce a vaccine as soon as possible, and before November 3rd, election day. Knowing that he has that as his objective, why would anyone take his word for it that it has been tested adequately? Or take the word of the federal agencies that he has under his thumb.

In the UK, we are very lucky to have a non-political NHS. I have trust that when the NHS says it's safe, then it will be. And I'll be one of the ones who will get vaccinated as soon as possible, because it isn't only the possibility of dying from this virus - 20% of people who get infected, suffer from "long Covid", where you are ill for many months, and perhaps you are permanently scarred by it. 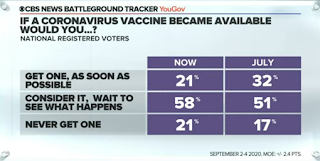