I bought it on February 1998, which is only 22 years ago. It's built like a tank, weighs a ton, not like the fragile balsa-and-string that's on offer today. So why did it stop working?

So I got it down from the shelf, took out the paper tray, opened up the top and removed the toner cartridge (which I recently refilled with a cheap bottle of toner, £10). No paper jam. But when I put it all back, still no printing. I power cycled it - no luck.

The printer is quite elderly, as explained above, and it has a parallel printer port, which was how all printers worked in those days. But today, most computers don't have a parallel port, and my current HP xw6600 boxes don't. So I print via a "Jetdirect 170x" which has an ethernet input and a parallel output. I power cycled the Jetdirect, no joy. But the status light was blinking, and when I googled the manual, is said that one likely cause is "not able to attach to network". So I followed the ethernet cable to the ethernet switch, and immediately noticed that all the LEDs were out. So I checked the power by plugging it in to a known good power cable, and that didn't help.

So I had found the fault - a dead ethernet switch. That is easy to fix - it's a 16-way switch, and I have a few spares of those. I swapped out the switch, and checked - the Jetdirect status light was giving an occasional flicker; looking good. So I tried to print a page on the Laserjet, and it worked. Hurrah. 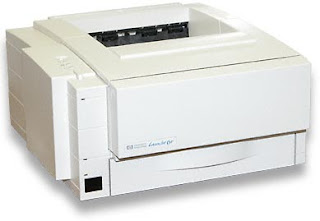 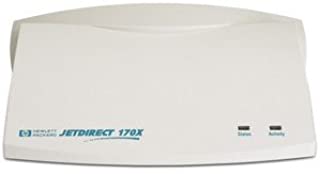