71 deaths and 7143 new cases. It's rising horribly fast. 7143 is the worst number we've ever had. There's a lag between new cases and deaths of 2-3 weeks, and the number of new cases we had then was about 3000. So this is going to get a lot worse before it gets better.

I accept that we're in a difficult situation, and we can't do a simple "lock down for everyone" like we did last spring. But how about this.

So you have defcon 1 (no restrictions) up to defcon 7 (total lockdown). Defcon 2 to 6 would have various restrictions, carefully spelled out on the government web site.

Then you would simply announce "Camberwick Green is now at defcon 3, but will move to defcon 5 from Friday." And there would be an app, and a map on the government web site, that showed the defcon levels for each area. So, if Boris visits Camberwick Green, before he goes he checks out the defcon level, and when he's asked, he can answer using the defcon number, and if anyone wants them explained, he refers them to the government web site. 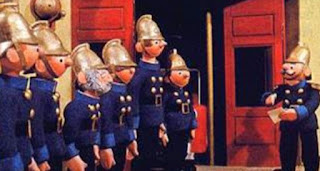