After the debacle of the "world-beating" contact tracing app trialled in the Isle of Wight last May, then hurriedly abandoned when it turned out to be useless, we now have version 2 to be launched on September 24, two weeks from now.

Businesses will display a QR code for people to scan in, and your smartphone will use the Google or Apple method to detect other smartphones - so it at least stands a chance of working.

But will people install and use it? We'll find out in a month or two.

Meanwhile, the number of new cases per day is ramping up; the latest number (for Thursday) is 3539 (but only six deaths). Deaths ramp up a few weeks after cases. France is now seeing 10k cases per day, and Thursday's death number was 80.

For me, the key question is, when will the vaccine be available. Because as soon as it's approved, I think it could be distributed very quickly, and jabs could be available at hospitals, clinics, GPs and pharmacies. It's looking to me like a race between the vaccine and the second wave that has started now.

Contact tracing will help, but given our government's track record in IT projects, and Dido Harding's track record at managing IT companies, I'm not optimistic. 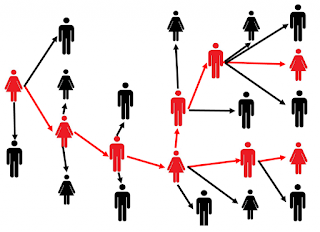