The number of new cases in the UK, was nearly 3000 yesterday. 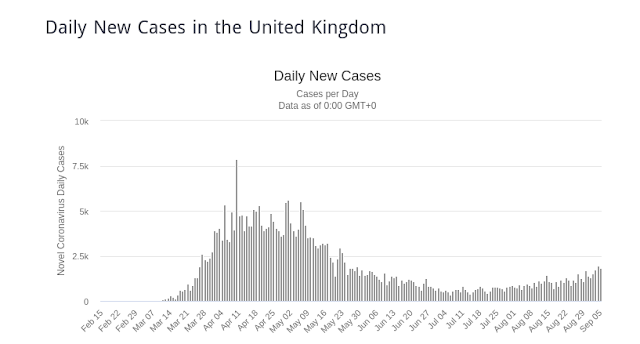 It's been rising slowly, as you can see, but now it's taken a dramatic upturn. Maybe this is only one day - but children are going back to school, and it's really difficult to stop kids from mingling. And anything they catch, they bring home to parents and grandparent. It's not looking good.

And some good news

But on the bright side, we've seen the first clinical double-blind trial of the efficacy of vitamin D. It was done in Span, and it's only a small sample.

They used calcifediol, which is a kind of "instant D". The pills you get in supermarkets are just as effective, but take several days to have an effect. They looked at 76 patients who were in a bad way, and gave them all the standard treatment of hydroxychloroquine and azithromycin. Some were given calcifediol, some were not.

Of the 50 given calcifediol, only one needed admission to the Intensive Care Unit, that's 2%. Of the 26 untreated patients, 13 needed ICU (50%).  And two of those died.

I've been taking 2000 IU per day of vitamin D for the last six months. I think it's time for a much larger clinical trial.