Back to Portsmouth today - I really like that place! A bunch of caches has popped up since I was there a few weeks ago, and rain was forecast in Cambridgeshire, so I headed South. On the road going there, it rained a bit, but it stopped by the time I arrived.

I tried riding the bike using one saddlebag, with both spare batteries in that, but it made the bike feel slightly unbalanced, and then as I went along some rough ground, there was a horrible noise from behind me. I thought "puncture", but what had happened, was the saddlebag had come off the carrier and was dragging along the ground, which has left it a bit torn. Repairs needed!

In the middle of Portsmouth, I saw this: 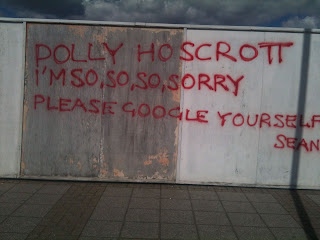 So I did google her, and if there was anything once, it's not there now.

Later on, I saw a tree cosy. 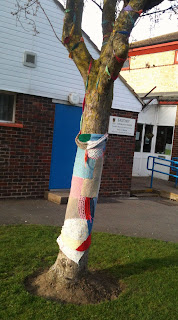 Knitted, of course. And here's a couple of black swans. 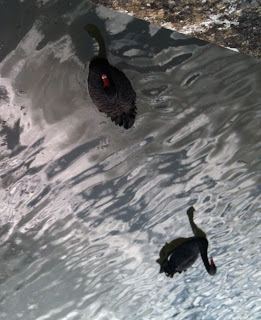 I got back to the car at 6pm, had lunch (!) and tried to do a Wherigo, but by the time I'd worked out what I had to do, it was time to leave.

I found 46 caches today, including a couple that I'd DNFed last time I was here, but I also DNFed half a dozen.

And I found several Munzies, even though I wasn't looking for them.