Today I was almost entirely on roads, and on the bike. I used 2 1/2 batteries and found 59 caches, and suffered 3 DNFs. There were a few spots of rain, but the main rain saved itself for while I was driving home.

While I was out, I encountered numerous Duke of Edinburgh groups, and while I was writing in one cache log, a couple of women arrived and started moaning about how their girls weren't there. As it happens, I'd seen their girls about 15 minutes ago and a mile away. "Thataway," I said, pointing.  I encountered them all a few hours later; they'd found each other.

I found this near a cache. I think the blue bag contains edibles. 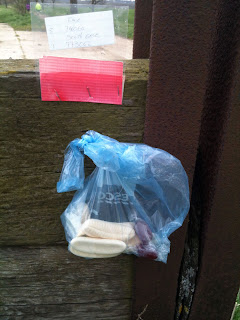