Up the A1 again today, but first a short stop to do a cache that's been niggling at me for a few weeks. On the way up the A1, about two miles north of where I join it, there's a cache that's right next to the road. The cache page says that you can't do it from the A1. Why not? I stopped at the layby near the cache yesterday, got out of the car and had a look around. And today, I parked again in that layby, hopped over the Arnco, across the ditch, under the fence and found the cache quickly. On the way back, I didn't need to worry about the fence; the fence just wasn't there for several yards. All entirely legal and safe.

Then on to the main event of the day, "Lutton and back". This is a circuit of 50 caches, but looking at the map, I thought it would be a major effort, involving a lot of walking, maybe fields that jam up the bike, and an exhausted cacher at the end of the day. It wasn't as easy as the terrain yesterday, but neither was it quite as bad as I'd thought it might be. Only two stiles to lift over, and although I did have to walk across a few fields that had been ploughed and harrowed (which often leads to terrain that clogs the bike so badly I can't even walk it), in this case the bike stayed wheelable, probably because the ground has dried out a bit.

Although in doing one cache, I wound up hip-deep in snow. The snow was filling a ditch of unknown depth, and I had to get across it to get to the cache. So I stepped onto the snow, and tamped it down until it felt firm underfoot, put my weight on it, and it held, so I moved onwards. And then the snow gave way, and I sank about four feet downwards. I managed to struggle out. But I didn't find that cache.

After doing the ring of 50, I had lunch in the car at about 16:30, and that revived me enough to do another half dozen caches. So a total of 57 caches today (and the one DNF).

I've never seen a cache hidden in one of these before. 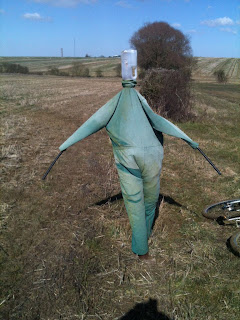 And here's a sad sight. 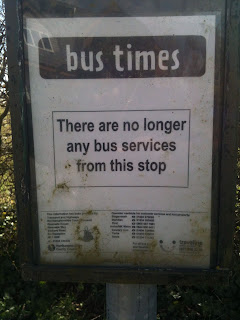 Oh well. At least there's a cache there.