33 years ago, a friend of ours, Mark Westley, had a camcorder. These weren't common back then. He used it to take some video of us and our kids (with a cameo role for Sooty the cat).

We lost touch ages ago, but recently, we discovered that he was the bridge partner of my cousin - my cousin has a different name to mine, so it wasn't obvious.

So via this link, I recently got my hands on an hour of video vintage 1983/4 (thanks Mark), on VHS tape, starring daughter.1 and daughter.2, with bit parts for me and ladysolly and a small role for Sooty.

So I fetched down an ancient VHS unit from the attic, plugged it in, and put a tape in. It played the tape, but then it wouldn't eject. But I'm not stupid - I'd used a VHS of "Monty Python and the Holy Grail" for testing, so not a problem.

Then I tried another VHS unit, and that worked. But the video capture device I had (A VideOh! from Adaptec) wasn't going to work. A) it runs from the parallel port, B) it needs Windows 98 and C) I have no idea where the software might be, since I last used it 20 years ago. Not a problem, for £5 you can get a USB video capture device from Ebay, so I ordered that.

While I was waiting for it to come, ladysolly asked me why I didn't use the VCR in the spare room. I had a look at that, and not only was it a VCR, but also you could use it to copy a tape to the hard drive, or to a DVD that was internal to the unit.

So I set it up, output to a TV, and an auxiliary output to a three inch PAL monitor from another project, and to a pair of powered speakers. I read the manual, which is fairly complicated, and tried it out.

And then, the rare tape of our toddlers. This covers from the time when daughter.2 was several months, until she was a couple of years. Here's a screenshot. 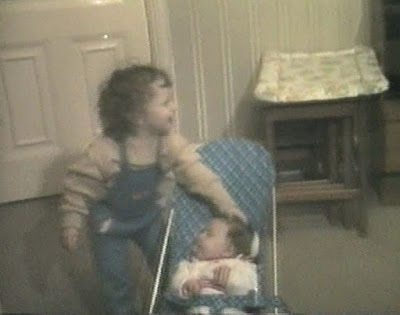 Daughter.2 is the small one. You see the nest of tables in the background? I still have that, it's used in the computer room.

Here's daughter.1 with her car. 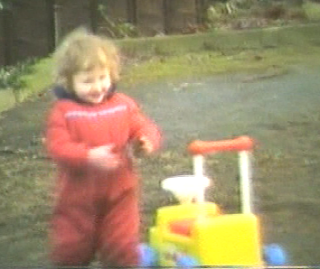 A year later, daughter.2 no the same car 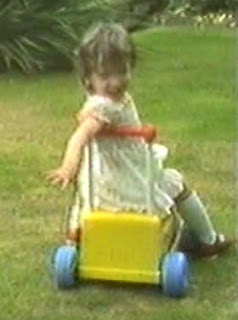 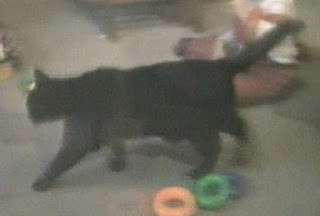 I copied the video to the hard drive, so now I can make as many DVDs as is wanted from that.

After I made the DVD, I had a look at it. There's a list of files with named like VTS_01_1.VOB. And I found that I could play those files with VLC on my linux computer. Probably ladysolly's iPad will be able to play them too, if I can work out how to copy them to there.

There's lots more, the video is an hour long, but since it's really of interest only to the participants, I shan't post it here.

I copied it to my iPad (an Ipad 1, inherited from ladysolly, because I don't really have a use for an iPad) and it will play the video, but not the sound when I use OPLayerHD Lite. And I can't install VLC player because my IOS is too old. But there's not much sound anyway, and it'll probably work on ladysolly's iPad, which is the latest. And maybe my iPhone?