I went out today for another bite at the Essex Way. Things went well until the last cache I planned to do before lunch.

I was about 50 yeards from the road, the going was soft. A tree was down, so options for getting to the road were limited. And then I sank in up to my ankle, which means I might get a wet foot. Then I sank in on the other ankle - two wet feet. But on the next step forward, I was in up to my knee, and then, mid thigh.

My bike was fine, it lay lightly on top of the bog, but I was embedded, and thoroughly stuck. I managed to pull one foot out, and make six inches progress, but then both feet were firmly stuck in the bog, about 60 cm under. I pulled and tugged, exhausting myself in the process. And, of course, pulling one foot upwards increased the load on the other foot, which sank deeper. I can see how people get irretrievably stuck in bogs. Eventually, I decided that the only way I was going to get my foot free, was to leave my left boot behind, so that's what I did.

I took my coat off, and folded it up to give me a platform; I also managed to drag a branch over to where I was. And by using that branch, my coat, and my bicycle (now lying flat on the ground) I was able to pull my foot out of the ooze. But I had to leave the boot behind.

I tried to dig the boot out, but I couldn't even get down to it, it was in too deep. So there's a perfectly good boot there, if anyone wants it, and is willing to excavate to get it. 50,000 years from now, an archaeologist will dig up the boot and speculate about a species of one legged cache hoppers.

So there I was, one boot on and one boot missing, in the middle of a bog. At that point, in retrospect, I should have considered the possibility of retreat. It says much for my ability to think that this possibility didn't even occur to me. Worse - I didn't actually stop to think. Forward was the only possibility in my mind, so forward it was. It's only in retrospect that I realise that maybe I should have gone backwards. But how would I get through the bog? That bog lay between me and the road, it had to be traversed.

So, forward! Naturally, things got worse. I abandoned the bike, and on the assumption that four wheel drive would be better, I crawled forwards on hands and knees, until I was able to get to the fallen tree. I used that to reduce the weight borne by the bog, and was able to get to firmer ground.

My coat wasn't just muddy. It was 90% mud. My trousers, likewise. I had one boot, my other foot had just a sock. And my bike was in the middle of the bog. 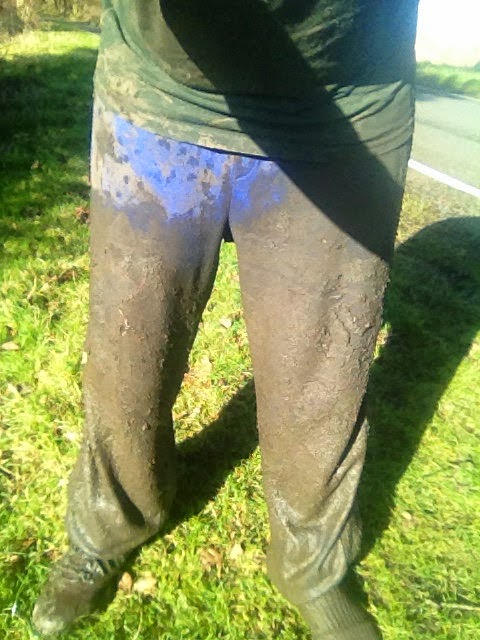 So I removed the sock. It wasn't really doing much for me. And I thought about how to get my bike; that's an electric bike, and to build another one like it would probably cost me at least £300. Not to mention the naughtiness of leaving bike-litter.

I carry a rope in my coat, but I couldn't see how that would help. So I went back to the bike, approaching it from a different angle, and making use of a fallen branch to stop my feet from sinking in too much. I was able to get to within three yards of the bike; then I pulled my booted foot out of the mud for another step, lost my balance, and sat down in the bog. I cursed, but actually it didn't really make much difference, I was already so wet and muddy that I couldn't get much wetter. I got up, took another couple of steps towards the bike, lost balance again, toppled over, and discovered that yes, I could actually get wetter and muddier. But in this toppled state, I was close enough to the bike to get hold of one handlebar, and I dragged it towards me.

I inched backwards, then dragged the bike, then inched backwards, then dragged the bike, and repeated this until I was on firmer ground - that is, ground where I only sank in to my ankles. Then I wheeled the bike to the stile, sat on the stile, and reflected on the universe and its propensity to not care about me. I took my sock and wrung it out as much as I could, then put it on, reasoning that for the trip back to the car, a sock would be better than nothing. There was no possibility of continuing the Essex Way; besides, this was the point that I'd already decided was going to be where I'd turn back and cycle along the roads back to the car.

I heaved the bike over the gate by the stile and got ready for the journey back. It was about four miles, but along tarmac road, and I had plenty of battery, so I didn't need to pedal, which is just as well because pedalling a bike with a bare foot (or even one protected by a wet sock) isn't easy.

I got back to the car quite quickly; bikes do very well on tarmac. And then I pulled out the complete change of clothing that I keep in the car for just such an eventuallity. I sat on a stile and took off my wet, muddy trousers, and then my soaked underpants, and I frankly didn't care if anyone came along the road and saw the spectacle (no-one did). Dry underpants, shorts and socks cheered me up a bit, hot coffee helped even more, and lunch made me feel a lot better. But I still didn't feel like continuing to the planned second part of the day, so I went home, and put all the wet muddy things in the utility room sink to be dealt with later.

They say that geocaching takes you to places you wouldn't otherwise visit.