Opioids are drugs like heroin (which is derived from the opium poppy, hence the name). But more recently, there's been a surge in synthetic opioids, which means opioids that aren't derived from the poppy. For example, hydrocodone, oxycodone and fentanyl. And one nice thing about those, is that you don't have to pay Afghan farmers, or drug smugglers. It's all synthesised chemically, and perfectly legal.

Here's why it's suddenly become of considerable interest. 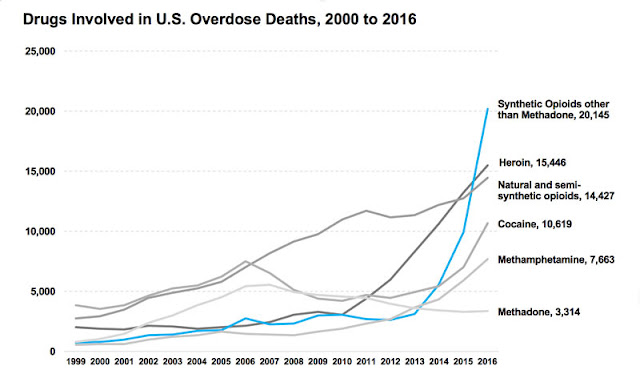 See that blue line shooting up in the last few years? That's the synthetic opioids. The steepness of that line, is a big worry. Look at it, and think what it'll look like if that line continues on up. And this is a particularly US problem. For every one million Americans, almost 50,000 doses of opioids are taken every day. That's four times the rate in the UK. In the UK in 2016, drugs killed 3744 people, which is a lot, but that is 60 deaths per million, whereas the US figure is 200 deaths per million.

And it's bad. More Americans die each day from drug overdoses, than car crashes.

Sometimes, opioids are a good idea - for example, cancer patients take them for pain relief. But it's clear that too many are being prescribed. There's a problem. How can it be fixed?

Trump has suggested “If they don’t start, they won’t have a problem. If they do start, it’s awfully tough to get off. So if we can keep them from going on and maybe by talking to youth and telling them: No good, really bad for you in every way. But if they don’t start, it will never be a problem.” Well, yes. But who believes that telling kids "Don't take drugs" will help? It didn't work in the 80s, it won't work now. Also, the problem here, isn't just kids.

Here's one problem - the American healthcare system. Suppose you have bad back pain (I know what that feels like). And you go to your doctor. And he decides that you have a muscle spasm. Which is what I get sometimes. The best treatment is physical therapy, but your insurance won't pay for that. But your insurance will pay for pills, so you get pills. Painkiller pills. Which doesn't address the problem, of course, just the symptom.

My solution to the bad back pain that I get after walking some miles, is to sleep flat on my back, and after a couple of days, the pain is gone. I'm not saying that would work for everyone - consult your doctor.

In the US, prescription drugs can be advertised on TV, to the tune of $6.4 billion in 2016. So you can go to your doctor and say "I want what I saw on TV", and you can be sure that the pharmaceutical companies don't spend $6.4 billion unless they believe it gives results.

In 2015, the American Medical Association requested an end to the advertising of prescription drugs. But it didn't happen.

Are opioids addictive? Well, duh. No-one doubts that heroin is addictive. And so are the synthetics, except the synthetics are new, profitable, and it's very much in the interests of the pharma companies to publish research that throws doubt on that.

So what is to be done?

In the case of the USA, I don't know. Their healthcare system is so buggered up, I can't see any way out for them. Plus, no-one in the USA seems to care about this issue, except the folks who die, of course, and they won't be making much noise. And it's in the interests of the pharma companies, the health insurance companies and the doctors, to fob off a person in pain with pills, instead of a more expensive treatment.

But in the case of the UK, and other countries that have a national healthcare system, we should use the situation in the USA as a dire warning about what could happen here unless we ensure that opioids are prescribed only when absolutely needed, and not to anyone who comes to the doctor with a bad knee.