With the recent experience of fixing keyboard 1 and 2, I turned my attention to keyboard three. The problem there is that all the keys work, but some of them add extra characters, such as a #. I can't imagine what could be causing this, but let's have a look inside.

I took off the outer beige shell, took off the keycaps (and put them to soak in water with a bit of detergent - some of them were very dirty) then turned it over. I balanced the assembly on two dead hard drives to keep it steady, then selected one of my new chisels (1/2 inch) and a mallet. It turns out that this is a MUCH easier way to cut the heads off the plastic rivets than the way I did it before. So I was soon able to separate the black plastic keyholder from the steel backplate.

The plastic sheets holding the traces were really dirty; I scrubbed them with a soft brush and some detergent, and left them to dry. When they were dry, I checked all the contacts for continuity, and they worked fine - no silver paste needed.

Then I started drilling. I'm using the Dremel now, and it's much better than the big drill in the stand. I got a chuck from eBay that lets me put small drills on the Dremel. The drill got clogged up with plastic every few holes; I scraped it off with a Stanley knife.

A 1/16 drill bit from the Dremel, then I'm using a 3/32 bit in an electric screwdriver to widen the hole slightly, so that the bolt goes in more easily.  I've drilled all the 57 holes, and checked that the bolt and nut will work.

All the keycaps are clean now, and I'm leaving them out to dry.

The steel backplate was rusty in places, so I wire brushed it until it was clean with the Dremel.  And some rust had leaked into the plastic sheets, and maybe that's the cause of the problem? At some point, this keyboard must have had water inside. We'll see after I do the reassembly. 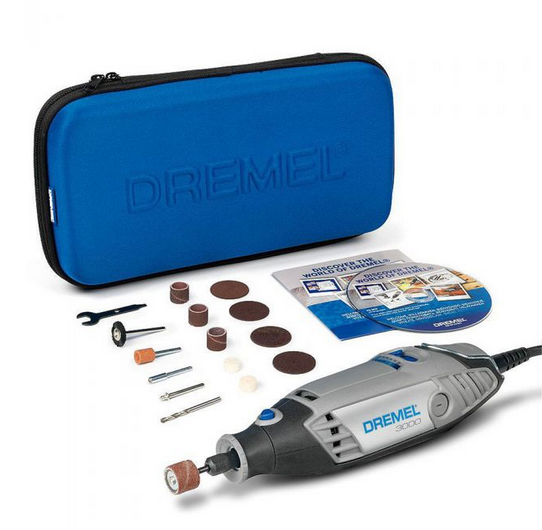