It turns out that you need a lot of HGV drivers to run the UK economy.  It turns out that if you tell non-British drivers that they aren't welcome here, then they leave. It turns out that when you make importing and exporting subject to much red tape at the borders, then driver time is taken up with paperwork when they culd be driving.

It turns out that this leads to shortages. Who knew? Chicken, vials, supermarket shelves and now ... petrol.

There isn't actually a petrol shortage, there's a shortage of HGV drivers to truck the petrol to petrol stations. As far as I'm concerned, that's a difference without a difference.

So when the possibility of petrol shortages became clear, a lot of people rushed to fill their tanks - which caused a real shortage. Bojo saying "Don't panic" led to, obviously, panic - who would have thought otherwise?

We're going down to London tomorrow by car (we don't want to travel on the train because of Covid). We have a full tank, filled a couple of weeks ago, we don't travel much.

If it gets really bad, I have my electric bike. 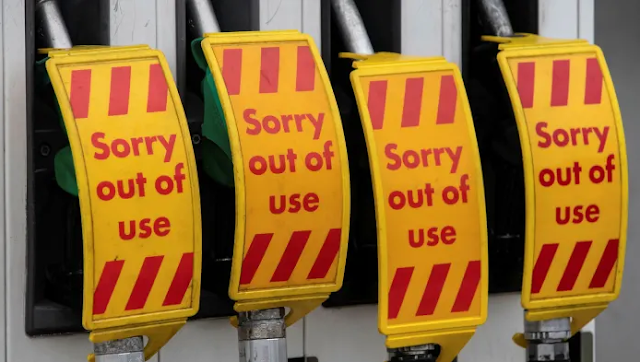