As mentioned in my previous blog, I am now under 200 pounds.

Electricity doesn't grow on trees. In the UK, a quarter of it is blown on the wind, but wind has been a bit low in the last few months. And a lot comes from gas-fired generators, but the wholesale price of gas has gone through the roof.

There's a price cap; it stops energy providers charging whatever they want.

The cap is reviewed every six months and from 1 October, another 12 per cent increase will come into effect. But wholesale electricity prices have gone from 53 to 83 (£ per Mwh) in the last several months, and a puny 12% rise isn't enough.

The electricity companies are being squeezed between the anvil of the price cap and the hammer of rising prices. Some of them will go bankrupt.

I'm not surprised. A long long time ago, I looked at the likely effect of an attempt to stabilise the price of wool. My conclusion was that it would work well as long as there wasn't any major mismatch between supply and demand, and then it would fail catastrophically. I was right; as I remember, it failed in 1985. I came to this conclusion after looking at price stabilisation schemes for other commodities - they had all failed.

If the existing system stays in place, the next review will be in April, and if prices stay high, the cap will have to be raised substantially, and that will be very unpopular. No-one likes a higher price - except the supplier.

It will all end in tears. 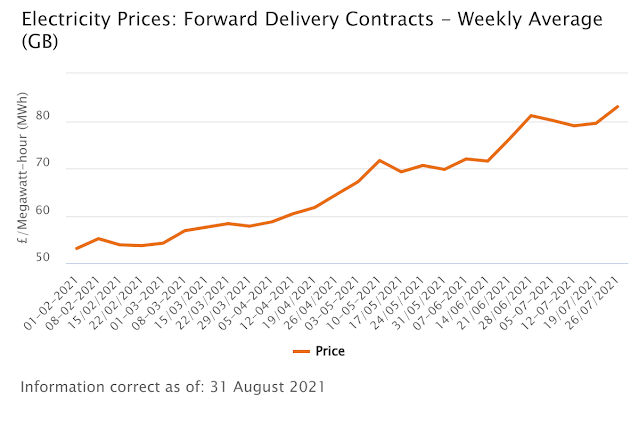