Day 545 of self-isolation - Awfulness in America

In America, the daily death toll has reached over 2000 in one day. But the truth is, because of the strange reporting system in Florida (and other states, as explained in this blog recently), the true number is at least 500 more.

How do we know this?

So, for example, Florida is reporting zero deaths for Thursday and Friday, which looks very good when you're assessing the state of the pandemic. But death does not take a holiday, and the coffins are still being filled. The difference that their way of reporting makes, is that we don't know how many coffins are filled until a week or two later.

It's almost as if the politicians of Florida are in the side of the virus, but don't want people to know how bad things are.

America is also tearing itself apart over the concept of mandatory vaccines. Actually, vaccines have been mandatory for many people for a very long time. You can't send a child to public school, unless they've had all their shots.

And part of America has turned from malaria medicine (Hydroxychloroquine) to horse dewormer (Ivermectin), in a desperate attempt to avoid taking one of the vaccines that has been tried, tested and fully approved by the FDA, and is proven to provide a major boost to the immune system in its fight against Covid. Nearly all the people in the Covid wards in American hospitals are unvaccinated.

Churchill said "You can always count on Americans to do the right thing - after they've tried everything else." But there's lots of half-baked folk remedies that they can try.

And it's not clear that they will eventually do the right thing. 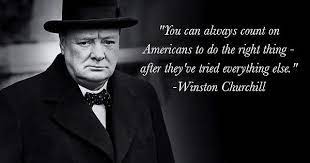