According to the numbers from Florida, there were ten deaths from Covid yesterday, zero the day before. This is down from 200, two weeks ago. These are non-comparable statistics (the polite work for fake).

Until recently, Florida counted deaths by the date they were recorded. That's what most people do.

But now, they count deaths by the date that the person died.

This doesn't change the number of deaths in Florida in total, but it does paint a rosy picture for the last several days. So, although the number now for August 28 is 14, that number will be revised upwards (I'd guess by a hundred or so) in the next week or so.

So from now on, Florida is going to look as if things are hugely improving ... even though the revised final figures available a week later, will show that this isn't right.

This has also affected the USA total death statistics, and is the reason why  each day, an additional 500 deaths are reported that weren't included in the previous day's numbers. So, for example, yesterday, USA deaths were reported as 1480. But the total deaths in the USA increased by 2017. Those additional 537 deaths, are deaths that are newly added to prevoious days.

The purpose of gathering statistics, is to guide policy. A statistical method that gives the appearance of a dramatic drop in deaths, where actually the fact is that the death rates continue very high, is going to mislead policy makers, and lead to policies that do not properly address the issue of the pandemic.

Most people aren't going to know that this is happening. Many people, even knowing that there has been a change in the definitions, will accept the false narrative of a sharp decline in deaths. There are very few people who are used to looking at statistics, noticing an anomaly, and discovering the reason for the anomaly.

Let's put this bluntly. Florida is faking their statistics, giving an illusion that the pandemic deaths have ended. Faking the numbers is not a good basis for setting policy. 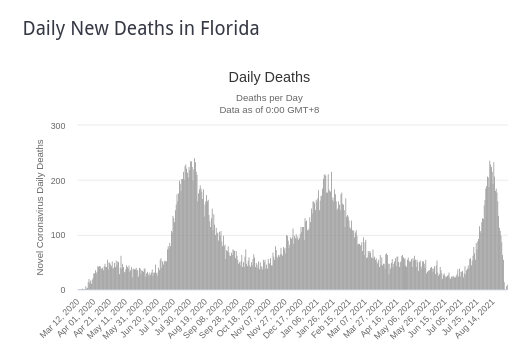