My first bike was as an undergraduate. As soon as I got there, I went to the cattle market, and bought a bicycle for five pounds and learned to ride it on the way back to my digs. It served me well for three years; I maintained it as necessary; fixing the gears, oiling the chain. replacing bearings and fixing tires. I sold it to a friend when I left.

There was then a gap for a long time.

About ten years ago, I got out ladysolly's old bicycle, fixed it up, and took it on a caching trail along a railway track that had been converted to a cycleway. It felt like I was flying. I hadn't forgotten how to ride a bike!

And then, a year or so later, I got my first electric bike. It was a big, heavy machine, ready-built, costing over £1000. I went caching on that bike along bridleways and cyclepaths. But it was very heavy, and getting it past obstacles was really difficult. Also lifting it on and off the car carrier was a big weight.

So I bought a folding bike, with 20 inch wheels. And two extra batteries. It worked well; it was much lighter, and I could move it over obstacles much more easily. Until it broke. I was sitting on the bike, stationary, and the frame just broke. There was no way it could be repaired. I walked back to the car, drove to where I'd left the bike, loaded the bike in, and drove home.

So I bought another just like it. But this time, instead of installing the batteries on a bracket behind the bike, I kept them in a bike bag on a back rack. I still have that bike.

I also bought a lightweight aluminium 20 inch wheel bike, which was nice to ride, but I missed the electric boost. So I took the wheel off the broken bike, and replaced the front wheel. I still have that bike. It has nine gears, Sturmey Archer, which means that you can change gears while stationary, which you can't do on a derailleur geared bike.

I was much encouraged by my ability to do this, and decided to make my own electric bike using a folding 26 inch wheel bike and an electric bike conversion kit..

So I bought an Everest folding bike with 26 inch wheels, for £99. Similar bikes are still available new for £170, second hand for a lot less. I replaced the front wheel with a motorised wheel, and for batteries, I used Hobbyking. Hobbyking mostly sell model aircraft and remote control model cars, but the batteries that they sell are great for bicycles, and MUCH cheaper than batteries sold as bike batteries.

The Everest still works, but then I found something a LOT better. That's the Xiongda double speed motor.  You fit it just like any other hub motor, but you can switch it between high gear and low gear. For caching over bridleways and other rough ground, I used low gear, but if I need to whizz back to the car along roads, I used high gear.

I put that motor into a Haro Samchuly 26 inch wheel folding bike, which meant that I had to install the motor in a wheel rim, which isn't easy, because you have to get spokes that are the right size, and the spokes have to be strung up in the right way.. The Haro was a perfect host bike. The folding was great, it had 21 gears, good brakes and I could easily add a back carrier. I armoured the tires by using Kevlar tires, with extra-thick inner tubes, and a gel insert. All this meant that, even over the roughest terrain, punctures were almost non-existent. I carried an extensive tool kit, just in case. That became my main caching bike.

This all worked so well, that I kept an eye on eBay, and when someone offered two Haro Samchuly bikes at a really good price, I bought both. I converted one of them into another Xiongda-powered bike, but at 48 volts instead of 36, giving me somewhat more power. The other one I kept as a non-electric, thinking that it could be used for spare parts, or something.

So I have seven bikes in my  bike park. And some of them haven't been touched for years, so I decided to do a bit of maintenance. I got them all out, pumped up the tires, oiled the chains and tested the brakes. All of them seem to be in great working order, except the valve on one tire leaks noticeably. I could replace that valve, or replace the whole inner tube, but it's one of the 20 inch wheels, so I won't bother.

I also recharged the batteries. All the "multirotor" batteries are fine (Hobbyking stopped selling them, they were very cheap and very good). Most of the others are too old.

So I now have six electric bikes operational (and one unpowered), although I'm only using the first electric bike I bought (but with a new controller and batteries) and the 36v Samchuly. 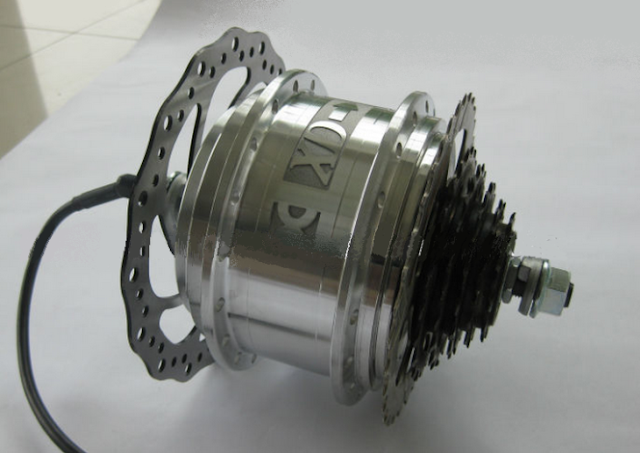