In the USA, the pandemic is on the rise again. That's partly because they are now experiencing the full fury of the Delta variant (the original Covid had an R of 2 or 3, Delta is 8). This wouldn't matter if everyone were vaccinated - but they aren't. Somehow in America, a health issue became a political issue. The virus doesn't care what your politics are, but Republicans tend to be non-vaccinated, and Democrats tend to be vaccinated. I'm at a loss to explain this, although the personal example of Trump in refusing to wear a mask, may play a part.

Nearly all the people in hospital, are unvaccinated. Some of them still think that Covid is a hoax, despite what their medical staff tell them. Some are asking for the vaccine, but you have to take the vaccine a few weeks before you get infected, not after. Some of them strongly regret not taking a simple jab that would have saved their life. Some have no regrets, because they still think that the haven't got Covid.

The latest number of new cases per day in the USA is over 100,000, a number we haven't seen since last February.

Meanwhile, the governor of Florida is still holding out against a mask mandate (with more cases per day that at any time in the pandemic), and some broadcasters are sneering at the efficacy and advisability of vaccination. It's almost as if there are traitors in high places. There's a war in America against the virus, we have powerful weapons in the vaccines, and some traitorous Americans are on the side of the virus.

Why? I'm mystified. Maybe the governor of Florida is rolling the dice for the presidential election in 2024? Maybe the broadcasters are playing to the audience of Trumpist antivaxxers? But either way, they must be relying on the large number of Americans who have heard from Terry on Twitter, Hubert on Youtube or Fay on Facebook, that the vaccine is not a good idea, for reasons. And these social media stars have more influence than the medical professionals.

Why has America lost respect for science? 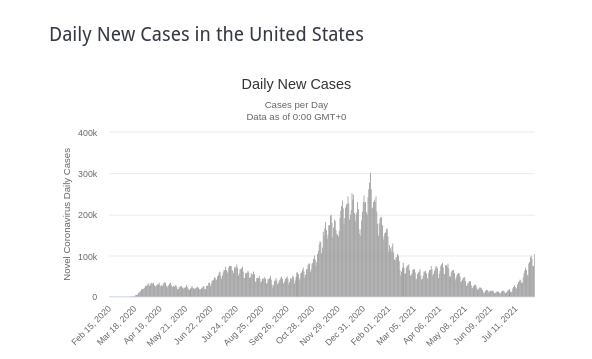