Day 485 of self-isolation - Shifting the blame

On July 19th, the government is abandoning the fight against Covid. Masking and social distancing, will be left to "individual responsibility". We're pinning all our hopes on the vaccine

Scotland, sensibly, is retaining the masking laws and social distancing (reduced to one meter).

So when it all goes pear shaped, our half-baked government will blame the people.

Sage, the government advisory group, says that hospital admissions could go to 4800 at the peak of the next wave. New cases per day will go to 50k, 100k or 200k, depending on which science you read.

Every day, we are fed statistical boasts about the success of the vaccine program - and indeed, it has been very good. But let's look at the figures.

The main threat in the UK is the delta variant; it's about 99% of infections now. And we know that with only one jab, the vaccine is only 30% effective. So how many people have had both jabs? 33 million, out of a population of 68 million. So, less than half.

The R number of the original Covid was about 3. Delta is more than twice as infectious, so that's an R number of about 7. So herd immunity happens at about 90%. We're at 50%. And there's no plans to vaccinate children. You can bring down the R number by masking and social distancing - but that is what we're about to abandon.

Also - the protection of the vaccine declines with time. Pfizer are suggesting a booster after six months. And, of course, there are still lots of antivaxxers, who would rather hope and pray for the best.

Delta is going to rip through those 50% of UK people. Actually, it already is, that's why we've gone from 2000 new cases per day, to 36660. Deaths per day has ramped up to 50. Our brave government has surrendered to the virus.

Individual responsibility? We had a recent lesson in that, after England lost the football. If they lose their minds over a football final, you expect them to act responsibly over something that they can't even see?

Our pear-shaped government is caught between a rock and a hard place. After promising an end to lockdown for many weeks, they find it difficult to say "The situation has changed, we're seeing more than 30k infections every day, we need to hold off a bit longer in unlocking". The rock is the economy, and the clear distress of the hospitality sector, and the airlines. The hard place is the pandemic.

How can our world-beating government escape this dilemma? By shifting responsibility. Tell people "we're not making a law, but please behave responsibly".

They didn't do that with seatbelts and crash helmets, even though the main penalty for not wearing, falls on the person not wearing. Why? Because, left to themselves, many people will not act responsibly (see pictures below).

And then the government will say "Not our fault, it was those irresponsible citizens". 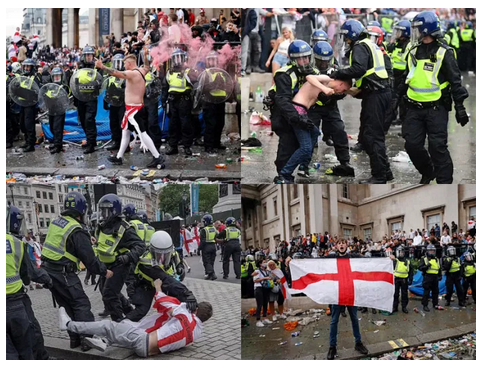