Another pound gone. Hurrah! I shall celebrate with a bottle of beer and a bag of crisps.

And our half-baked but oven-ready government has found the answer to the problem that the NHS app is telling a LOT of people that they need to self-isolate.

The answer is to degrade the app. Tell less people.

The answer is to weaken the effectiveness of the app.

This would make sense if the virus had become less infectious than it had been. But the opposite is true - it's more infectious.

Some people are deleting the app, so as not to get alerted. I suppose that's another way to get round it.

If your smoke alarm is giving an alert, what's the right response? If you think it's to remove the smoke alarm, then you got it wrong.

Currently, the app triggers if you are less than 2m from an infected person for 15 minutes. In the last week of June, 360,000 alerts were sent to people in England and Wales. If taken seriously, that means 360,000 people self-isolating for ten days.

And, of course, they won't self-isolate. We've reached the point, again, when test-and-trace doesn't work. The virus is, once again, out of control, restrained only by the vaccinations. And on July 19th, we're going to open up completely. Which will give a boost to the spread of the virus.

35707 new cases yesterday; that puts us fourth in the league table of new cases per day, with the three above us being Brazil, India and Indonesia, with somewhat larger populations than ours. We're third on the number of active cases, beaten by Brazil and USA.

I think that we might become the "horrible example" to the rest of the world, on how not to deal with the pandemic.

This feels to me as if our oven-ready but half-baked government is throwing the dice. So let's hope we don't come up snake-eyes. 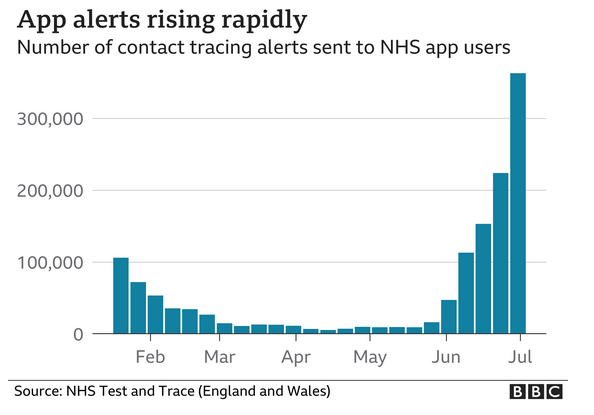