Bojo says there could be 50,000 new cases per day by July 19. Sajid Javid says it could rise to 100,000. Professor Neil Ferguson an epidemiologist from Imperial College London, says it could go up to 200,000.

The vaccines have weakened the link between cases and deaths, but Ferguson says that deaths could reach 200 per day.

Let's look at reality. On Tuesday, we saw 32k new cases and 33 deaths (on Monday, 28k cases and 37 deaths), and both figures are rising exponentially, so 50k in 12 days time, looks optimistic.

If we do get to 100k cases per day, then 100 deaths per day looks plausible; you only have to treble both of the most recent figures.

And now we have the Lambda variant to come - this is currently predominant in Peru, and has been found in the UK. What happened to Epsilon to Kappa?

If Lambda is more infectious than Delta, then it will outbreed it - evolution in action again. Just as Delta (first seen in India) outbred Alpha (first seen in Kent), and Alpha outbred the original Covid.

And there are 19 more letters in the Greek alphabet - and when we reach Omega, someone will think of more names. We're seeing a significant new variant every few months. 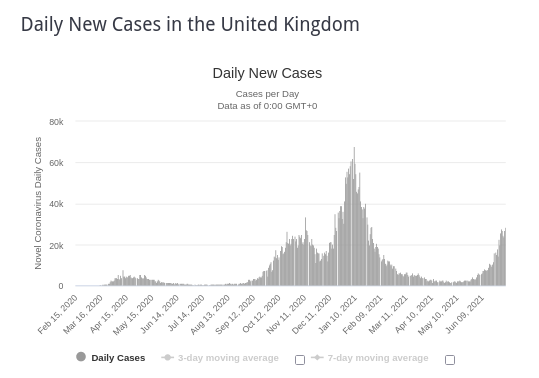 The important number is still hospitalisation. If a thousand people have "a bit of a sniffle", that's not a problem. And although that's rising now, it's still very low compared with how bad it was last winter.

And that's what justifies the reopening on July 19. 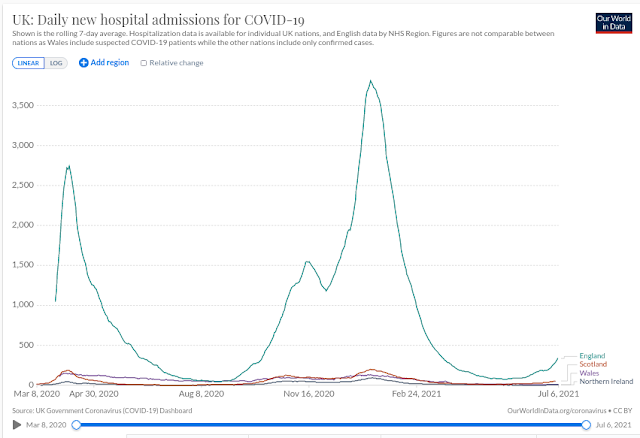