Day 474 of self-isolation - Mixing it up

Some research in Germany has shown that if your first vaccine is AstraZeneca and your second is Pfizer, then you have more antibodies than if you have a double shot of AstraZeneca.

This is going to be particularly significant whe we start y be offered a third "booster" jab.

At this time, the UK is very high up in the list of countries vaccine rollout; the percentage "fully vaccinated" (which mens, two doses) is nearly 50%

So, even though we're seeing 27000 new infections per day, the hospitals are not swamped and the daily death toll is under 30. And that lend support to the idea of reopening the country on July 19.

On the other hand, hospital admissions are rising, because daily infections have been rising.

July 19th is going to be a difficult decision. 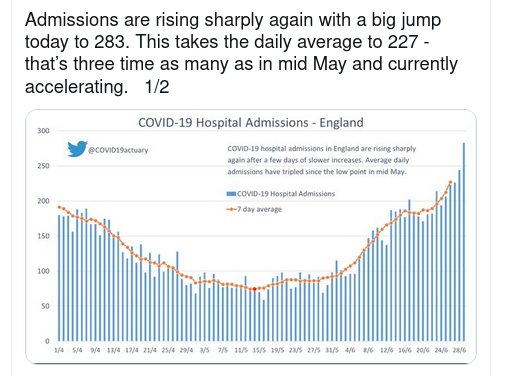 Yes, people are still dying.  But in 2017/2018 (the worst flu yeat in the last five years) there were 22,000 flu deaths, that's 60 per day. Back when we were seeing over 1000 Covid deaths per day, it was right to treat Covid as a soecial case. But not so much when it's down below the seasonal flu death toll.