15 months ago, we were being told that masks are useless against the virus.

Now we're being told that masking slows the spread of the virus.

Nothing changed. It was a cock-up.

For me, it was always clear. Covid is at least partly (and more like, almost wholly) an airborne disease. It is a respiratory disease. We always knew that it attacks the lungs and bronchial tube. Yes, hand washing is a good idea, and has no downsides, but Covid spreads mostly through the air.

My blog in May 2020 reported a scientific experiment, using hamsters, that showed that masking reduced R0 by so much that the virus would peter out. And that people who did get infected, would be less likely to hospitalise or die.

I'm not a medical expert. This study was available to everyone. Fox News picked it up, and in May 2020, were strongly in favour of masks.

Yet we were being told "Don't mask". We were being told that it's useless, we were even being told that it could increase your chances of getting Covid. The official excuse was that they were trying to preserve the limited stocks of N95 masks for healthcare workers. But that doesn't wash - it's easy to make a cloth mask, and paper masks were readily available. No, our oven-ready government (and that in the USA) was advising against masking, because reasons. Maybe they should have been honest, if lack of N95 masks was the issue.

And now, of course, we have a substantial section of the population who don't mask because why would they believe the current line?

OK, "the science" changes when new data become available. But in this case, "the science" didn't change, only the politicians. Trump has been strongly anti-mask, and suggested that wearing a mask signalled that you didn't like Trump.

In March 2020, 10 countries had policies recommending face covering. By July, that was 130, but by that time, the first wave was over.

Suppose, instead of crashing the economy, governments has recommended masking. Or even mandated masking. If most people had complied with this (and why wouldn't they?) then the economy could have been maintained, with fewer people hospitalised or dead.

This was the Great Mask Cock-up, and has probably has effects that are even worse than delays in going into lockdown, or in travel restrictions. 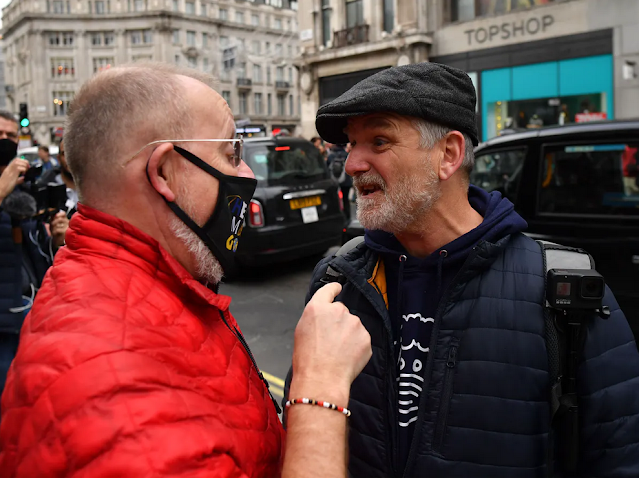