While I was in the server room, I heard a grinding noise. That's usually a bad noise. I have two ears, so I was able to track down the server making that noise, and sure enough, when I powered it down, the noise stopped.

A grinding noise is usually a faulty fan.

I opened up the server, and it was easy to locate the fan with the problem. I had to dismantle the power supply to get it out, and it checked out - the bearing had worn out.

Fans run 24/7, and because they are mechanical, they are a frequent failure. This fan was 40x40x20 mm, and I have a few of those in stock, so I replaced it with a good fan, and everything is OK now.

But what was I doing in the server room? Another computer was faining to start up. When I put it n the workbench, it was starting up then immediately going into a "kernel panic", which is a situation where the  system has failed so badly, it has to stop immediately.

I swapped out the memory, and replaced the system drive, and one of those two changes fixed the problem. Some time soon, I'll test the memory to see if it's usable. 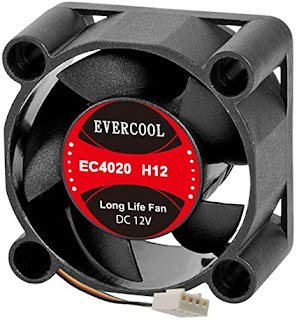