I knew my PhD would be useful one day. It was all about Bayes theorem. And most people haven't a clue about it, even though it is 300 years old.

Here's how it works.

Suppose you take an LFT, and you get a positive result. That doesn't mean that you're positive,a because even if it has a 0.1% false positive rate, you need to do the following calculation.

Or, let's take a more extreme example. Suppose we wipe out Covid, but still get this same false positive rate. Then all of those 997 people flagged as infected, are actually not infected. And the false positives are - every single test.

That's because Bayes theorem tell you that you have to look at the PRIOR probability, and then build on the test. So the number of infected people out in the real world, influences the likelihood that the test is correct.

Doctors commonly get this wrong - the poor darlings are medical experts, not statisticians. In a 2013 study, 5000 doctors were asked for the probability that someone had cancer, given that 1% of the population has cancer and that the test is 90% accurate. 3/4 of the doctors gave the wrong answer. I'm not surprised - most people don't know Bayes theorem, or how important it is.

This is going to get more and more important, as testing ramps up, and Covid ramps down.

And here's a picture of the Reverend Thomas Bayes. He's buried in Bunhill Fields Brial Ground, London. I visited his grave. I felt that I owed him that, since he led to my doctorate. Left two pebbles on it. 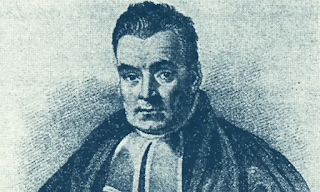