I was awoken this morning by ladysolly. She couldn't get on to wifi, and she needed it SOON for her bridge game.

So I went into fault-finding mode.

I soon discovered that my workstations upstairs couldn't access the internet. Or even any of the servers downstairs. But things in the server room could access each other, and the internet.

That pointed to one thing - the ethernet switch in the cupboard under the stairs. That's a 24-way ethernet switch, taking a feed from the server room, and distributing it all over the house.

But first things first. I had an increasingly twitchy ladysolly asking when it would all be fixed. I have a wifi access point in the server room, and that was still working fine and had internet access, so I connected her iPad to that, and she was happy.

My first thought was that the 24-way switch in the cupboard under the stairs had failed. I've had switches fail before, and this one is at least 12 years old. So I carefully unplugged all the 24 cables, and took it out. I tested it, and it worked fine. Rats. It wasn't that, then.

I replaced it anyway - I've been meaning to upgrade that 100 mbps to a gigabit switch, so I did that, and connected the switch up to the 24 cables. still no joy. The server room was cut off from the rest of the house.

There is an ethernet socket on the wall of the server room. That connects to a cable that comes out where the 24-way switch is. But I couldn't get a connection.

I got my cable tester out, and plugged the master in to the server room socket. Then I went hunting for the other end, using the remote tester. No joy.

So let's go for broke. I took a 30 meter cable, and ran it from the server room all the way to the 24-way. I plugged it in, and bingo! Everything works.

So, the problem is the cable that goes from the server room to the 24-way, and since that cable is inside the walls, I can't really fix it. I think the fix that I've bodged up, will have to do. 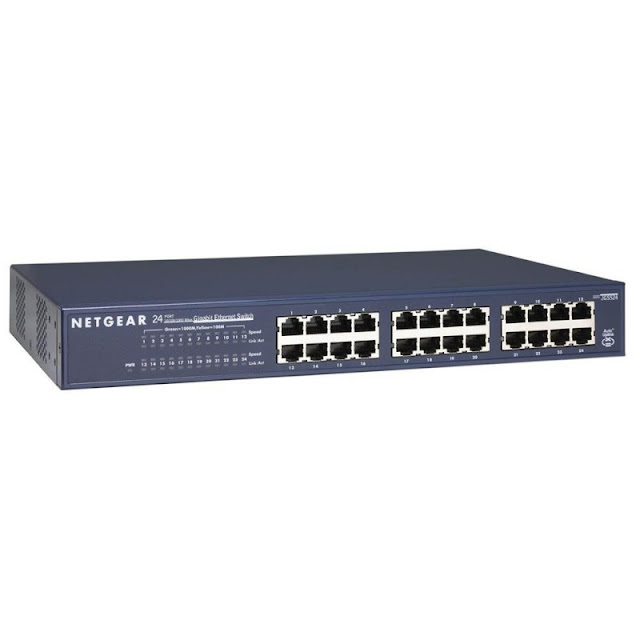