Grandson.1 has been putting together a Powerpoint as a school project on inventors, and I'm delighted to say that he chose me as his example.

I'm no Edison or Tesla, but I have done some stuff. I had a Meccano Number Five when I was a lad, and I made many inventions with that. For example, I used it to build logic gates which I then put together into an adding machine. Which was not in the instruction book!

More of this later, I hope - my sister has gifted me with a large collection of Meccano (mine rusted away a long time ago) which I plan to use to introduce grandson.[1-3] to the delights of making things.

And then a crystal radio, a transistor radio, an analogue computer, a valve tester, a multimeter, a white line follower, and many others.

I think that my best invention was Virtran. Virtran meant that I could describe in that language, where to go in a file to find a virus (for each different virus), what to expect to find when you got there, how to do an exact identification, and how to repair the file. And it meant that I didn't have to rewrite the engine for each virus. It made the time spent for dealing with each virus, shrink from several hours, to a few minutes.

In 1993, my colleagues put this invention forward for a Queen's Award for Technology. Only five are awarded each year. And we got one of them. We sent two of our staff to the Palace to the ceremony, and we had our own company-wide celebration in the Town Hall, where the Lord Lieutenant of Hertfordshire (wearing a sword) presented the award again.

And here it is. 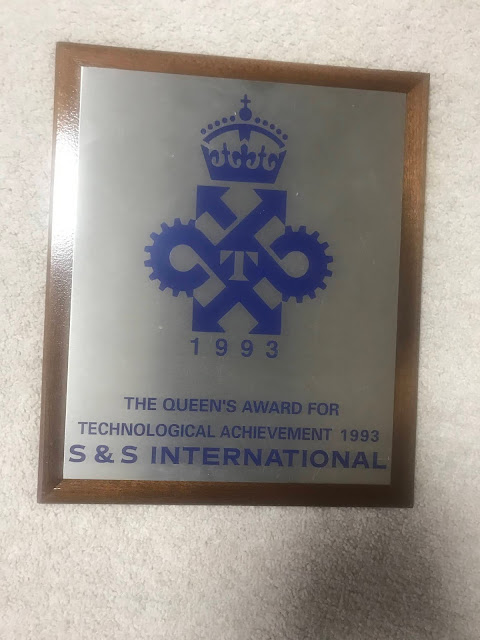