Friday's new case number was 7434 - we're back to the numbers last seen at the end of September. Plus, we were given our first dose of the Pfizer vaccine three weeks ago. and nearly 30% of people have had the jab. Things are looking good!

Gibraltar is the first place to get more than 100 vaccinations per 100 people - remember, these vaccines need two jabs.

Not so great across the channel. France has only had 6 jabs per 100 people, and that's partly because their oven-ready President Macron said on 29 January that the AstraZeneca vaccine is "quasi-ineffective" for people over 65. Whatever that means. "The early results we have are not encouraging for 60 to 65-year-old people concerning AstraZeneca".

So then on 2 February, France's Health Authority made an official recommendation that the vaccine should not be used for people over 65. Idiots.

So now Macron said on Thursday he would gladly accept being inoculated with the Oxford/AstraZeneca COVID-19 vaccine if it were offered when his turn comes.

Mixed messaging is not a good idea in this situation.

In Germany, there are 1.4 million doses sitting unused; Angela Merkel said that she will refuse the AstraZeneca vaccine. And in Germany, only 7% of the population is vaccinated. In Europe as a whole, 80% of doses haven't been used.

What are they thinking?

Meanwhile, the noise about "Vaccine passports" continues. Should we or shouldn't we?

I already have mine. It was issued by the NHS, says which vaccine, which batch, and the date it was given. But it doesn't call itself a "passport". It's a "record card". 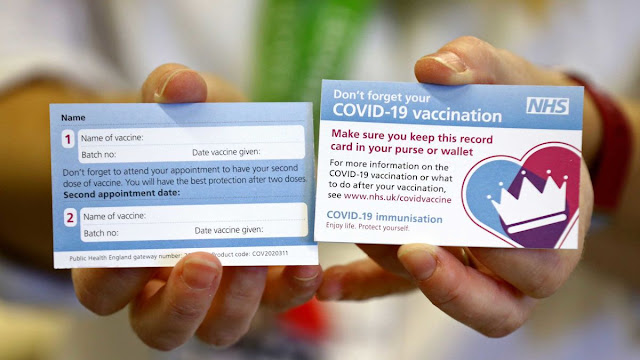