I've complained to the advertising Standards Authority about the MyPillow advert on LBC. The problem is the "Buy one, get one free" claim. They are advertising a "sale", but when something is on "sale" for a very long time, it isn't a sale, it's their standard price. Mypillow are claiming that their standard price is £119.90 for a pillow, and that the "sale" price is £59.95, according to their web site. We#'ll see what happens.

The Covid alert level has been lowered from five to four. The difference is that hospitals are not at material risk of being overwhelmed. This means that we've weathered the latest storm.

Drsolly Towers is still in lock down, and we're planning to stay that way until either the number of new cases is below 2000 per day, or else we both have had our second jab plus three weeks. Because for about a year now, I've been more cautious than our beloved government, from the Cheltenham race meeting, the "eat out to help out" spreader scheme, and (I think) I've been right.

Here's the plan.  March 8, kids back in school; April 12, shops reopen; May 17, hospitality reopens; June 21, we hope, if all things go according to plan, a general reopening. I think that's possible, but we need to watch the numbers as we go along.

Meanwhile, in France, less than six per cent of the population has been vaccinated - 28% in the UK. I really can't understand why France (and Germany, Italy, Spain and so many others) have been so much slower to vaccinate than the UK. Nor can I understand why the people of those countries aren't screaming at their governments to exdigitate.

IRobot have messed up their software, and it will be several weeks before they can fix it. I'm so glad that I failed to buy the iRobot. The Proscenic works fine, and is a third of the price. 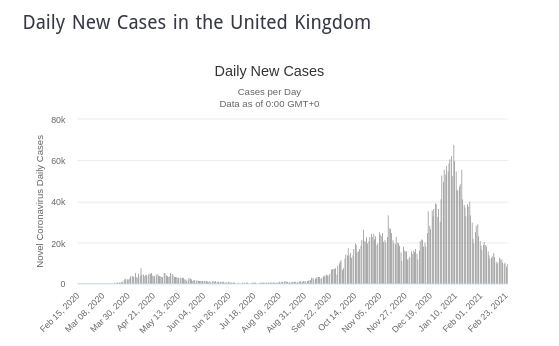