First of all, good news on the weight situation - my latest mass was 15 stone 10 pounds.

So I got onto the web, and did some research. There seem to be many brands of robot vacuum and mop, but the leading brand seems to be the Roomba, by iRobot.

I narrowed it down to the i7+, which is their top end model, and also empties itself after vacuuming, so that you only need to empty the trash once per month or so. Sounds good. Also, I can control it from a mobile.

Then for the mop, the choice was the Braava Jet M6. Same control.

On the iRobot web site these two were available as a bundle for £1299, ladysolly agreed, so I bought the bundle. Or I thought I did. After I gave the web site all the information, including my John Lewis credit card, it came back to the same screen, with the same items in the checkout. So I did it again. Same problem. So I went through it all again, but this time via Paypal. Paypal told me that the card was blocked.

So I went back to the web, and found the myrobotcenter.co.uk web site (post Brexit, it's become difficult to buy from outside the UK). I found the same models there, and although it wasn't a bundle, the total price was £1228, £71 less than iRobot. I paid for that using my Barclaycard, and I think it went through. With a bit of luck, I'll have them in time for ladysolly's birthday.

But there was unfinished business. I had to make sure that iRobot didn't send me their robots, and I had to tell John Lewis about what had happened.

So, the next morning, I called John Lewis. What I didn't know, was that they'd already contacted ladysolly about the issue, and she'd sorted it out. The next half hour was painful, because I had undone that sorting out by my phone call, and we had to go through it all again. Eventually, everything was straightened out, and iRobot aren't going to get paid, which means they won't deliver the robots, which is fine, because I bought from myrobotcenter.co.uk.

If this works out well, then I'll get the same again for the upper floor. 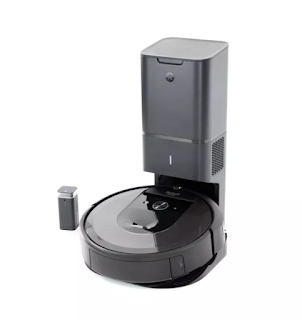