There are two kinds of test. There is the polymerase chain reaction (PCR) test. These aim to detect the RNA of the particular virus that they are testing for. But what is the accuracy? They are good for confirming that you have the virus, but not so good at giving you the all-clear. You get a false negative 30% of the time. In other words, if you test 100 infected people, the test will say that 30 of them are not infected. Not good.

The other kind is the lateral flow test, which is the one that the UK government uses for testing, and it's even worse. The government claims that these are 77% accurate on false negatives, but that's a lie. If you use experienced nurses to test symptomatic people, only 23% of infected people are passed as clear. But in real life? Not fit for purpose. If non-medical staff test people without symptoms, it's a lot worse.

Yet the government is writing to schools and parents telling them that the Innova lateral flow test is as accurate as a PCR.

So the bottom line is this. If you take a test and it shows positive, then you probably have the virus, and should isolate for the required time. And if you have great difficulty breathing, get to hospital.

But if you take the test and it shows negative, that doesn't mean that you are definitely clear. It means that you might be clear. But with what probability?

But if you work in a hospital in a Covid ward, and even though (of course) you're taking the greatest precautions, then your prior probability isn't as good as mine.

But it's still good; only a percentage of hospital workers catch Covid.. And so if you take a test and you're passed as clear, the probability is even better that you're clear, but by no means 100%.

Uninformed people might think that passing a test means that you're clear. But now you know that it isn't that simple. The tests are far from perfect.

Even if you're tested as clear, you should still continue to take the same precautions that you were taking before the test.

We have to people coming next week to install our heating system. We'll give them a test before they start, and if they test positive, we'll tell them that and send them away. But if they test negative, we're still going to take all the precautions that we would have taken if they hadn't been tested - masking and distancing.

It makes you wonder why exactly the UK government has spent more than £1 billion on buying these tests. 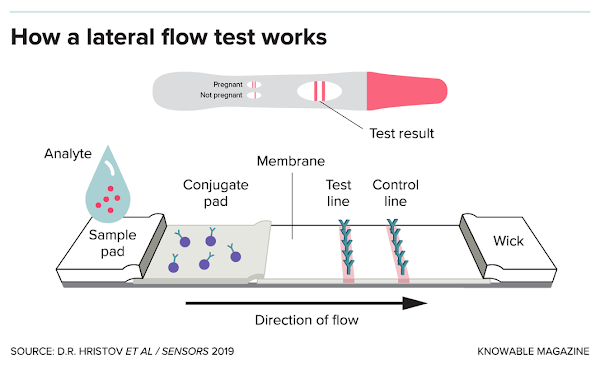