As of now, 3.5 million people have had their first jab. The first target is to give the first jab to the top four groups by mid-February. And if you look at the graph, it's looking like the target might get achieved.

Those in that target include:

These groups account for 88% of deaths from Covid. So ladysolly and I are expecting to be invited to our jabs in early February.

This is strange. Everyone surely knows that higher mortality is correlated with darker skin, so if anything darker skinned people should be keener to be inoculated. We don't know whether that higher mortality is caused by vitamin D deficiency (darker skins make vitamin D more slowly) or whether it is socio-economic factors. But either way, you'd think that people more at risk would be keener to take the vaccine.

Why is this? Nobody knows. But there are far too many people spreading disinformation, ranging from the mythical "chip implantation", the mythical "it isn't halal" all the way up to "it hasn't been tested enough".

Meanwhile, Salisbury Cathedral has been temporarily turned into a vaccination center. 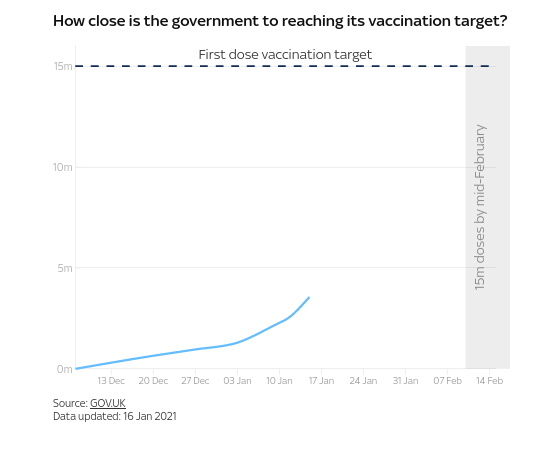