Day 206 of self-isolation - Trouble up North

Manchester, Liverpool, Newcastle are facing additional lockdowns. Pubs and restaurants will be further restricted. This is because the priority is to keep schools and universities open.

Now that the "blocked spreadsheet" problem has been Dynorodded, a lot of cases have become apparent. As you can see from the chart, the number of cases is now well above the worst of last spring (before removing the blockage, the number was thought to be around 7000, but was actually 50% bigger and climbing. We still need to avoid swamping the hospitals.

Death numbers aren't as dreadful as last spring, because our world-beating government has now realised that we can't just dump infected people into care homes. Also, we now have much better knowledge of how to treat Covid. But anyone who does reach hospital, will still need care and attention, and there are bottlenecks such as the number of beds (Nightingale temporary hospitals help with that) and staffing, which isn't solved so easily. So deaths are up to 70 per day, a tenth of last April, but still rising in a very unpleasant way. And since deaths lag cases by a couple of weeks, I think that will get worse.

London has not been targetted yet for more restrictions, but I suspect that it will.

I'm sad for the pubs, restaurants, theaters and the whole hospitality industry, but if I had to choose between those and the education sector, I think our children's education is more important.

So do we have the option of just letting the virus rip through the population? Yes, of course we do. But whoever makes that decision, will have to live with their conscience owning a number (unknown) of additional deaths. 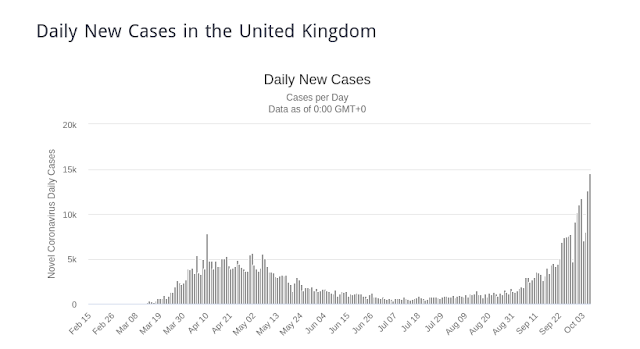