What is herd immunity, and what do the numbers mean? Herd immunity is the situation when so many people in the "herd" are immune to the virus, that the virus can't find enough people to infect, and dies out. Historically, this has been the only way that epidemics can end.

There are two ways to be immune to the virus. The first way is to become infected. My immune system sees the invader, and does the necessary things to kill it. And it remembers via mechanisms that we've evolved, so that the next time it sees the same (or similar) virus, it can go straight into action and kill it before it affects the body. The other way is to "teach" the body about this new virus - that is called vaccination, or immunisation. There is a third way, of course, and this is to die, but none of us want that.

So what percentage of people need to be immune, to reach herd immunity? The calculation is really quite simple.

Let's call the average number of people who get infected from one infected person, R0. If R0 is less than 1 then the virus will die out, and the nearer it is to zero, the faster it will die out.

If R0 is exactly 1, then each person infects one other person, if it is slightly less than 1, the virus slowly dies out.

What affects R0? A number of factors, such as  how the virus spreads, and how many virus particles does it take for it to take root. So for example, if it spreads through the air, it will be more infectious than if it can only spread by shaking hands. We measure the R0 by observation, you can't calculate it from the virus genome.

So, consider a virus with an R0 of 2. Each person infects two other people. But if one of those two is immune, then that drops the number infected to 1, and the virus can't grow. So, clearly, herd immunity for that virus would be 50%.

If a virus has an R0 of 10 (measles is 15) then nine out of those ten would need to be immune, so herd immunity happens at 90%, and that's why public health people are so keen on measles vaccinations for everyone.

More generally, we can use the formula

So what happens when everyone wears a mask? Masking interferes with the transmission of airborne viruses. It works in two ways. First, if someone is infected, then a mask will trap most of the virus particles they are shedding, because it will trap the droplets that they are carried on (especially coughs and sneezes, but also ordinary breathing). Second, if someone is not infected, then the mask will reduce the number of virus particles that they breathe in, and so reduce the likelihood of the virus being able to establish itself in a new victim.

So, suppose that masking reduces virus spreading by half, and the R0 falls from 3 to 1.5. We can put that number into the formula, and we find that we reach herd immunity at 33%.

But it isn't going to be possible to persuade every susceptible person to mask, or even every infected person to mask, because often people don't know that they are infected. So, masking will reduce the spread of the virus, and the population reaches herd immunity at a lower level of immunity. Not-masking means that you don't get to herd immunity until a lot more people are infected.

Vaccination isn't going to be perfect either. Flu vaccines are never 100% effective, and the Covid-19 vaccines won't be either. But a bigger problem (in some countries) will be vaccine refusal. And the people who refuse vaccines might be the same ones that refuse to mask. Countries that have such people will, of course, suffer far more than people who take the sensible precautions of masking and vaccination, but what can be done about that?

The campaign against cigarette smoking was massively successful; UK men smokers fell from 82% in 1948 to 14% today. Why was that? People were told the facts, and shown the consequences of smoking. We need to do the same for vaccination and masking. Show the facts and show the consequences. 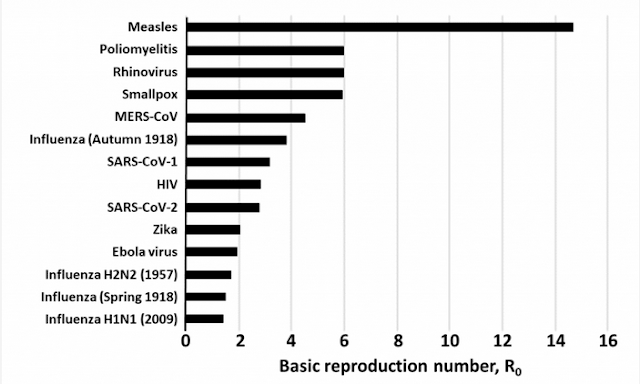