Day 152 of self-isolation - vaccines and fines

How are vaccines tested?

In the pre-clinical stage of testing, researchers give the vaccine to animals to see if it triggers an immune response.

In phase 1 of clinical testing, the vaccine is given to a small group of people to determine whether it is safe and to learn more about the immune response it provokes.

In phase 2, the vaccine is given to hundreds of people so scientists can learn more about its safety and correct dosage.

In phase 3, the vaccine is given to thousands of people to confirm its safety – including rare side effects – and effectiveness. These trials involve a control group which is given a placebo.

The Russian vaccine has not been through phase 2 or 3, and Russia's top respiratory doctor has resigned in protest at the gross violations of ethics involved in rushing through this vaccine. The Oxford vaccine has passed phases 1 and 2, and is now in phase 3.

Our government has spent another £90 million and bought 60m doses of a vaccine from the US company Novavax, and 30m doses of another from the Janssen Pharmaceutical Company, owned by Johnson and Johnson. GSK/Sanofi Pasteur is also providing us with 60m doses. So we're buying a variety of eggs in a variety of baskets, and now have a total of 340m doses. Let's hope that at least one of them works!

We're relaxing the lockdown from Saturday - at least you can have your eyebrows threaded, which means they pull out the hairs at the follicle level. I have rather bushy eyebrows, but I keep them under control with scissors. Still, if you're a fan of threading, it's great that you can be threaded again.

Fines for going unmasked in a situation where it's mandatory (for example, public transport) have been increased to £3200, but since only 33 people have been fined so far, I wnder how much effect this will have. I find it amazing that people are willing to accept laws against drunk-driving (which benefit everyone) but some are reluctant to wear a simple cloth mask.

I'm just bought, on eBay, three 3M type 8835 masks - one for me, one for ladysolly and one for the wash. In addition, we both have washable cloth masks, and a couple of dozen disposable paper ones.

We're also allowed to gather in groups of up to 30 people; the fine for going above that limit is up to £10,000 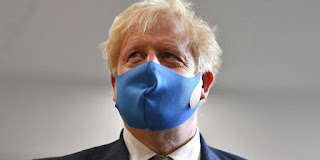