If you are of a nervous disposition, don't read this post.

Bolivia's healthcare system has collapsed under the pressure of the virus. We no longer have precise statistics on what is happening there.

Bolivian police said on Tuesday they recovered more than 400 bodies from streets and homes over a five-day period, with 85 percent of the dead believed to have had coronavirus.The other 15%? Maybe from heart attacks, strokes or other problems that a hospital could have alleviated. 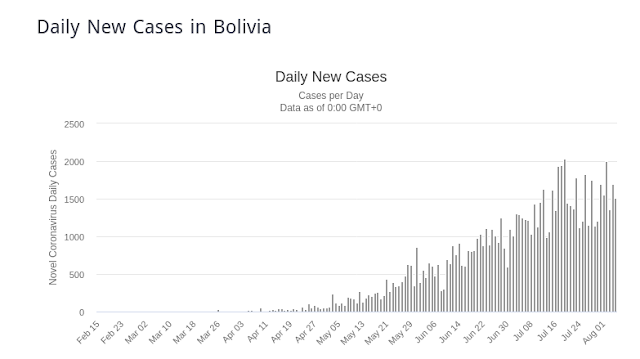 Hospitals are full, and have closed their gates, and put up signs saying "There is no space".

Here's the problem. Many Covid-19 victims can be saved by the provision of oxygen, and kept alive while their body gears up and fights off the virus. We also have drug treatments that are tested and known to work, for simple and also severe cases. And in the situation of a swamped healthcare system, the death rate increases from under 1%, to something much greater.

And Bolivia hasn't hit the peak yet.

Some Bolivians have resorted to fake cures, including a toxic bleach (chlorine dioxide) that people are lining up to buy in the city of Cochabamba. Disinfectant is fine for cleaning surfaces, but poisonous to drink. Or inject, as one famous person suggested. But the national Senate has approved its use and a top lawmaker has threatened to expel the World Health Organization for opposing its medical use. Does that sound familiar?

Medical experts say chlorine dioxide is, at best, a placebo. As we know, the majority of people recover without any drugs. But it's sad that several people needed hospital treatment after poisoning themselves with the bleach.

Does that remind you of anything? All the people who claim spectacular results, while not bothering to do a proper clinical trial.