An assortment of good and bad news.

Johnson and Johnson are one of the 150 companies developing a vaccine. They inoculated 6 monkeys, and 5 of them were immune to Covid-19. Human trials started at the end of July.

A US company has been experimenting with training dogs to diagnose Covid-19 by smelling urine or sweat. They are claiming 95% accuracy. Dogs have a very clever nose, and are used at airports for sniffing out drugs, and large amounts of money. Apart from a large wet nose sniffing your luggage, they are non-intrusive.

Russia is claiming that in October, they will start mass vaccination. Is it possible that they have got so far ahead of the USA? But then I remembered Sputnik. And if the Oxford vaccine could be ready by October, so could others.

Then the bad news

Tropical storm Isaias will soon hit Florida, and is expected to be a hurricane by the time it hits. This will complicate the response to the pandemic. How do you do social isolation when large numbers of people have to sleep in refugee centers?

A survey has revealed that 14 million children in the USA are going hungry, mostly because of the way that the pandemic has affected parents' income.

Australia is in the grip of a major second wave. They got the case numbers down to zero, but now they are surging, and the governor of Victoria has declared a "state of disaster" and imposed strict lockdown measures. Current deaths per million are 8, which is much lower than we're seeing elsewhere, but they want to knock the virus on the head.

Mississippi has joined my list of states to keep an eye on. The sate has poor medical services compared to other US states, and the case numbers are rising fast. Deaths per million are 568, which is much worse than the big states that have been hitting the headlines. 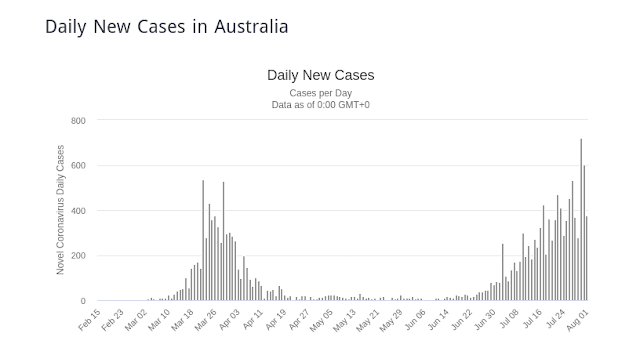 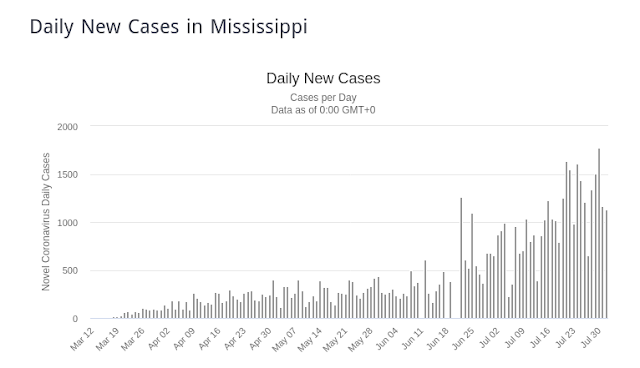